The Crazy Pig Lady, The Reverend And The Mistress – The Still Unsolved Hall-Mills Murder of 1922

The morning of 16th September 1922 brought with it the double murder of Reverend Edward Hall and Eleanor Mills, in Brunswick, New Jersey. It would captivate the nation for years after, being referred to as the crime of the twentieth century up to that point.

A young man, Raymond Schneider and fifteen year, Pearl Bahner, found the bodies on the sunny Saturday morning, laid under an old apple tree. They rushed quickly to the nearest house they could find, informing the owner, Grace Edwards, of their grim discovery. She immediately called for the police.

​Hall had been shot in the head once. Eleanor though, had been treated much more savagely. Her throat had been cut - her head all but taken off her body save for her spinal cord. Her tongue had been cut out and her larynx removed and she had also been shot several times in the head and face. Investigators noticed that maggots were present in the wounds around Eleanor’s throat – indicating that the pair had been dead for at least twenty-four hours. 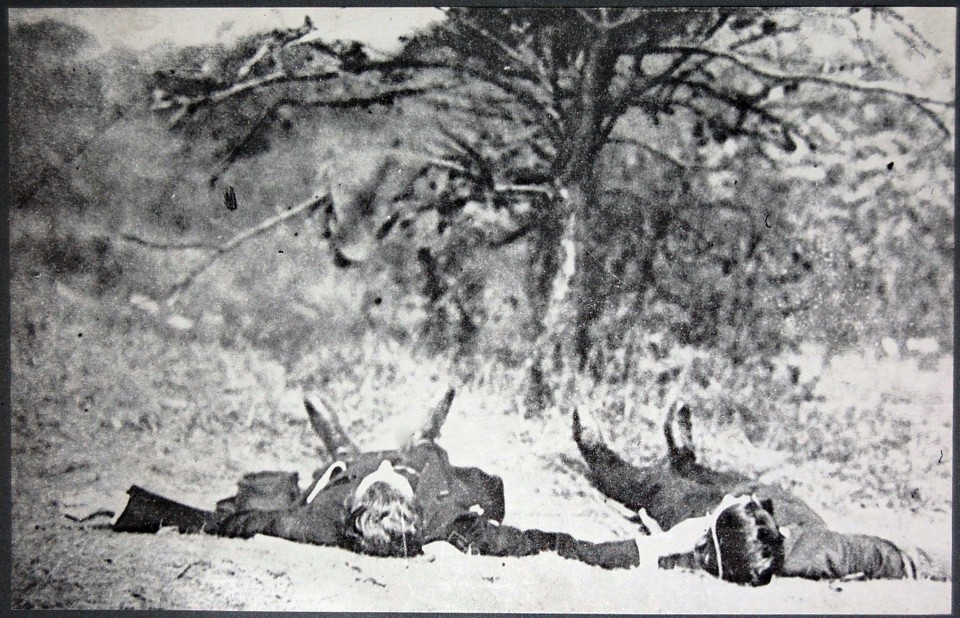 The bodies of Reverend Hall and Eleanor Mills how they were discovered
Reverend Hall was married to Frances Stevens Hall, (heiress to $2 million of the Johnson and Johnson family fortune) and was the rector at the Protestant Episcopal Church of St. John. He was also having a deeply involved affair with the woman who now lay next to him – an affair that had for some time been the gossip of the church community. Perhaps it was because Eleanor Mills was the wife of, Jimmy Mills, the sexton at the same church.

If there had been any doubt to those rumors, they would have been quickly dispelled, as around the dead bodies were found several torn up love letters that had been written by Eleanor to the reverend.

Initial confusion over jurisdiction, and what was later regarded as general incompetence at the scene, tainted and compromised evidence. The ground had been trampled by onlookers who had arrived, and some had even taken “souvenir” bark from the tree the bodies had been found under. If not for the grim reality that two people had seemingly met a brutal and untimely end here, it would have been comical when the hot-dog sellers and other vendors arrived to set up their stalls at the site as the day went on.

Suspicion, as one might expect, fell on each of the spouses. While it appeared common knowledge to everyone spoken to that the affair had been going for nearly four years – both Mrs Hall and Jimmy Mills stated they knew nothing of it – and what’s more, they didn’t believe it.

A quick look around the Mills’ home revealed to detectives that it hardly appeared that Eleanor was hiding the affair from her husband at all. More letters, this time from the reverend to her, were found in plain sight in a bag behind the living room door.

​Even Jimmy’s version of events of the evening he last saw his wife, almost suggested she wanted him to find out about her prolonged affair. 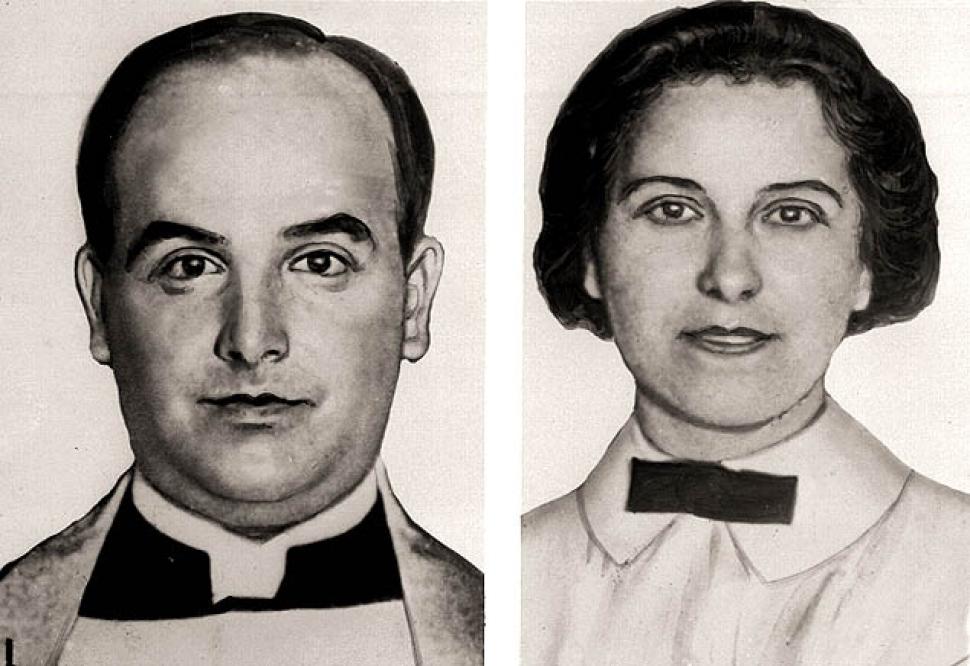 Reverend Halls and Eleanor Mills
​According to Jimmy Hall, on the evening of 14th September, at around 7pm, his wife had informed their daughter, Charlotte, that she was taking a newspaper clipping to the reverend’s desk – an article from the New York World by Dr. Percy Stickney Grant, a well-known, liberal minded Episcopal clergyman – who incidentally, believed in divorce.

She returned home around fifteen minutes later to retrieve a hat and scarf before heading out again. When Jimmy had asked her where she was going, she replied “Why don’t you follow me and find out!”

Jimmy declined to do so, despite her unusual, almost goading response. She had apparently informed her daughter that she was going to the candy store in order to use the payphone there, to return a call she had had from Reverend Hall. What was strange about this was that, although the Mills’ didn’t possess a phone, she would normally go to her neighbor when she had to make a call – on this night though, she chose to use the payphone further away. It would be the last time he, or their two children saw her again.

When she had not returned by 10 pm, Jimmy went out to look for her but after a brief search he came back home and went to bed. He said he awoke again at 2 am, and went to look for his wife in the attic bedroom – a room she always slept in with her daughter. Again she wasn’t there so he went to the church to see if she might have “had one her fainting episodes” in the pews. Again he did not find her, so returned home.

When asked why he had not contacted police on the Friday morning when she still had not returned, Jimmy stated that it was not unusual for his wife to disappear for a day or two, so he wasn’t overly worried.

​He stated he found out about his wife’s death on the Saturday morning during an early lunch he had taken. He was on his way to the crime scene, when his daughter informed him that a positive identification had been made – the bodies were that of her mother and Reverend Hall. He claimed he then went to the Hall’s residence where he got quite sick with the news.
Mrs Hall herself had her own version of events.

She claimed that in the early evening, Eleanor Hall had arrived at their home asking to speak with the minister, who was distributing flowers at a local hospital with their niece. Eleanor had asked Mrs. Hall to have the minister call her as there was something on a doctors bill that she didn’t understand (Eleanor had recently had medical treatment that the Hall’s had paid for).

A little after 7pm, following dinner with herself, their niece and her brother, Willie Stevens, the reverend excused himself and stated he was going to speak with Eleanor regarding the doctor’s bill. This was the last time she ever saw her husband.

Like Mills, she claimed she attempted to search the area with her brother, Willie, when her husband failed to return home, and she did “anonymously” ring the police the following morning to enquire about any casualties. She was advised the next day by her attorney to file a proper missing person report with the police. She had intended to do this the following day, but when a journalist appeared at the home asking her questions about her husband, she feared the worst. The events were later confirmed to her about her husband’s murder.

​The police, although they suspected one or both, of the two spouses, had no evidence to arrest either of them. 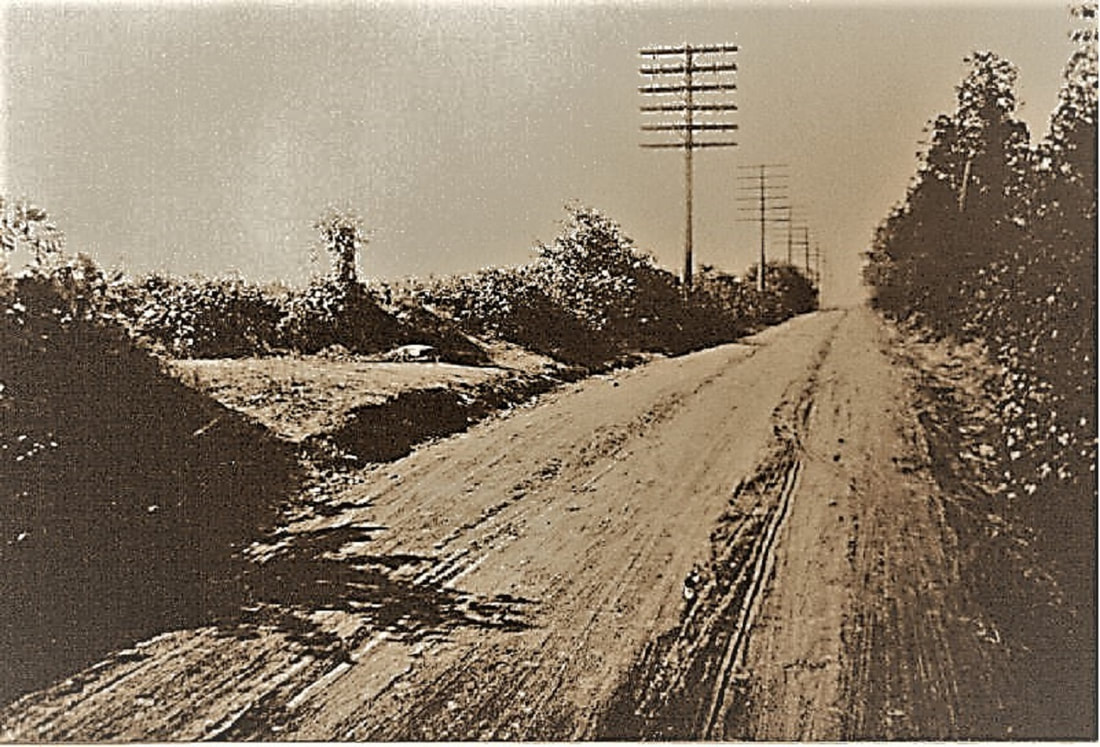 Derusseys Lane (as it was in 1922) leading to where the bodies were discovered.
It wasn’t until a lady named, Jane Gibson, a lady who would be referred to as “the pig lady,” stepped forward and gave an account of that fateful evening that placed Mrs Hall, her brother and her cousin at the scene of the crime.

Gibson stated she had had a problem with corn thieves in the previous days, so when she heard a wagon go through her corn fields at around 9pm on the evening of the murders, she assumed they were back. She grabbed her gun and on the back of her mule, proceeded to follow the wagon.

Eventually a car pulled up ahead and provided a little light. She dismounted her mule and continued on foot. It was around this time that she heard arguing coming from under the big apple tree.

She could make out four people as her eyes grew more accustomed to the dark – two men and two women. She claimed that one of the women suddenly shouted, “Explain these letters!”

There was the sound of a scuffle, before a shot rang out. This made Gibson turn and run, but she could still hear a woman scream “Don’t! Don’t!” before three more shots pierced the otherwise quiet evening.

​Despite this evidence, the grand jury declined to indict anyone, and Mrs Hall, Willie Stevens, their brother Henry Stevens and a cousin named, Henry Carpender, walked free from court. 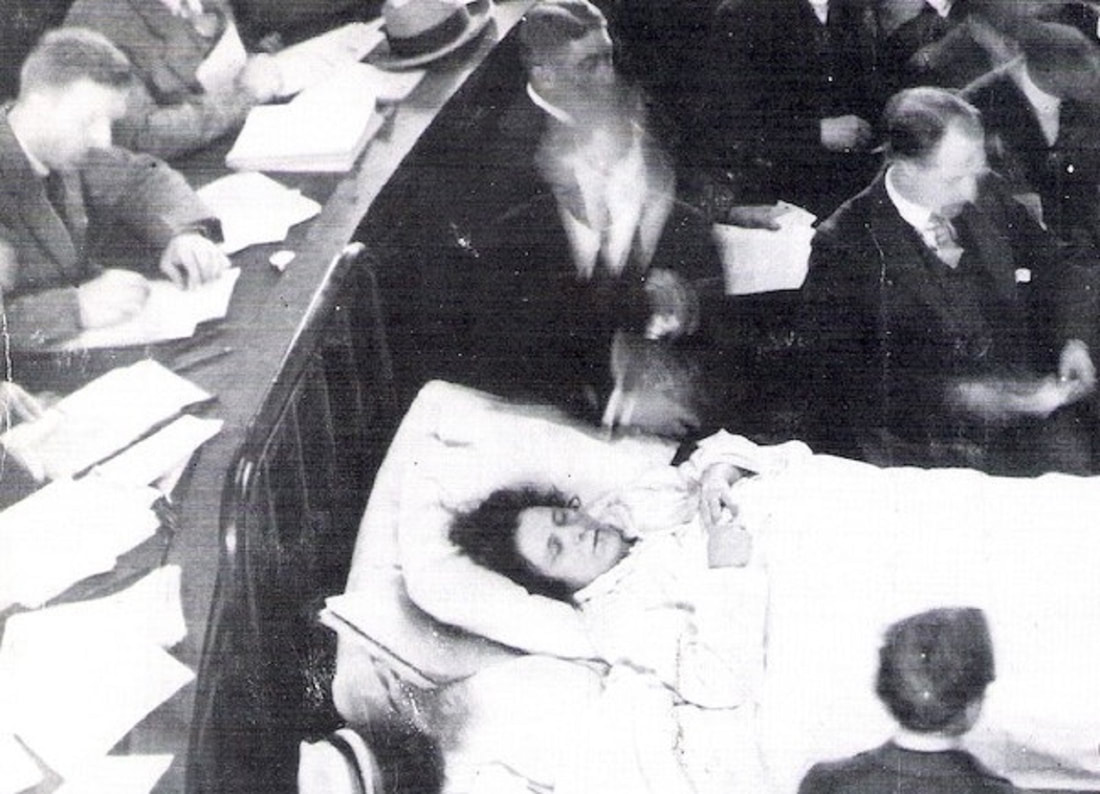 Jane Gibson - otherwise known as the Pig Lady, gives evidence from her hospital bed in court.
Four years later however, the husband of the former Louise Giest, Arthur Riehl , filed a petition for annulment of their marriage – the reason he gave was that she had withheld knowledge from him, and the police, about the Hall-Mills murder. He stated that Louise had been a maid at the Hall residence at the time of the murders, and not only had she had assisted the Hall family in killing the pair, that she had been paid handsomely to do so and to keep quiet about it.

​Pressure immediately came from the newspapers and the public at large to reopen the case – which eventually it was.

​This time a trial date was set, with Mrs Hall, her two brothers and her cousin, standing accused of the murder of Reverend Hall and Eleanor Mills.
The prosecution’s key witness though, Gibson, was portrayed by the defense as being a “crazy old woman” whose accounts varied depending on who she told them to – this was proven to be true as versions of events given to police compared with those given to the press were not the same. It didn’t help either, that she was wheeled into the court on a hospital bed to give evidence.

​Ultimately after a thirty day trial, despite all four of the accused having the motive, they were found not guilty, due to there simply being very little, if any actual evidence to convict them. Check out the videos below, which offer a little further insight and imagery into this fascinating encounter. 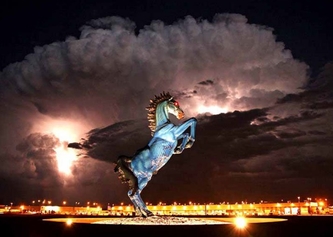 ​Killer Horses, Swastika Runways and Children-Eating Aliens – Welcome To Denver International Airport?
Almost as soon as it opened in 1995 there were questions as to what was really going on at Denver's new airport....