Crop Circles, Ice Rings And The Roswell Rock – Hoaxes? Alien Art? Or Messages That We Are Yet To Understand?

While a great many “crop circles” have been proven to be silly hoaxes by bored students or those with a strange sense of humor and too much time on their hands, some have left people genuinely perplexed as to their origin, and their purpose.

They are also not a new phenomenon – they have been recorded for hundreds of years at least – before a time when people were seriously thinking about hoaxes, much less doing so in the name of visitors from another world. 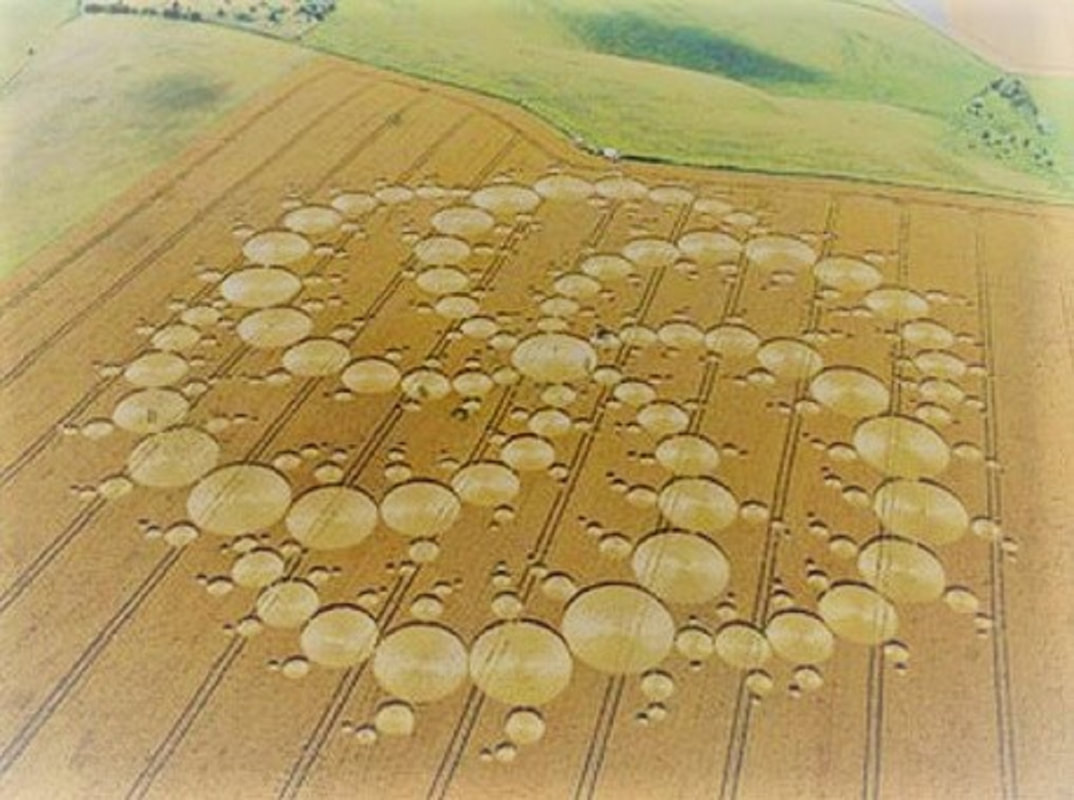 The Galaxy - one of the most perplexing crop formations in history (see below)
Native Americans, for example, recorded seeing circles on the plains that they attributed to the “star people” (who they considered very real) – perhaps this is where we get the connection with aliens being responsible for the crop circles and formations we see now in modern times.

​Ice rings are also a very similar phenomena that while rarer than crop circle sightings have been reported numerous times around the world. While mainstream science states these to be caused by warm water flows under the ice, it is a surely a bit of a reach to think that a “perfect circle” can just appear seemingly out of nowhere at random spots.

While some of the designs appear random and could just possibly be for art’s effect, others appear to show more complicated things such as the DNA strand, complicated mathematical figures, and even binary codes. 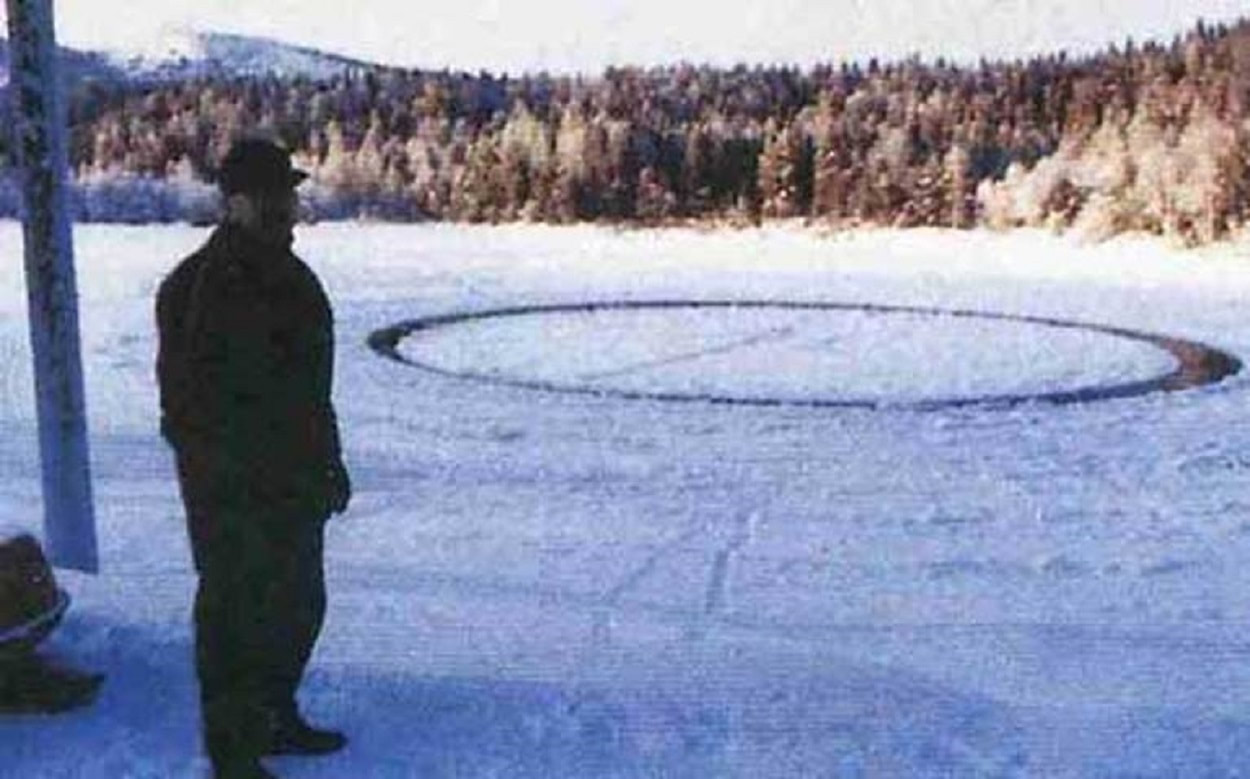 In 2012 in Milk Hill, Alton Barnes, Wiltshire a crop formation appeared that was nicknamed “The Galaxy” – it consisted of 400 perfect circles and the sheer size of it even had people that would normally doubt their authenticity rethinking their stance.

​In this particular case, one of those was John Lundberg, who after stating that given where the field was, it’s points of entry and such, that if it was a hoax, the people who created it would have had no more than four hours to do so, went on to say:

“Given that there are 400 circles, some of which span seventy feet, that would mean that one of these circles would need to be created every thirty seconds and that's not even allowing time for the surveying, purely for flattening. This formation pushes the envelope, and that's a massive understatement.”

Indeed, The Galaxy is one of the most fascinating crop formations in history. And one that, like Lundberg, even most skeptics believe to be genuine. Before we move on, check out the short video below. It looks at this particular crop formation in more detail.
In 2001, a strange crop formation was reported in a field next to the Chilbolton Observatory in Hampshire, England.

What made this formation perhaps more interesting than most was that one of them almost mirrored that of a radio signal sent out into space by Carl Sagan and his team twenty-seven years earlier from Puerto Rico in 1974. Only it appeared this message had been modified – almost as if it was a reply.

The message sent out in 1974 by Sagan was named the Arecibo message after the satellite dish it was sent from. It was designed by Frank Drake who was Director of Arecibo Observatory and was essentially a binary code that contained information about humans, the Earth’s population, DNA and our atomic and numerical system.

The broadcast, or beam, was aimed at globular cluster M13 – a star system around 25,000 light years away.

Was this a genuine reply that had been etched into the ground right on the doorstep of an observatory?

It is also worth noting that a declassified NSA document titled  “Key To The Extraterrestrial Messages” shows that a total of twenty-nine “messages” were received. Messages that literally came from outer space after the Arecibo signal was sent, and that were in binary form. You can read that document in full here.

Incidentally, the other formation was that of a face that some claimed looked very much like that of a “grey” alien, and the year before another crop formation had appeared in the same field at virtually the same spot. You can see the formation below, and below that is a comparison against the original 1974 message. 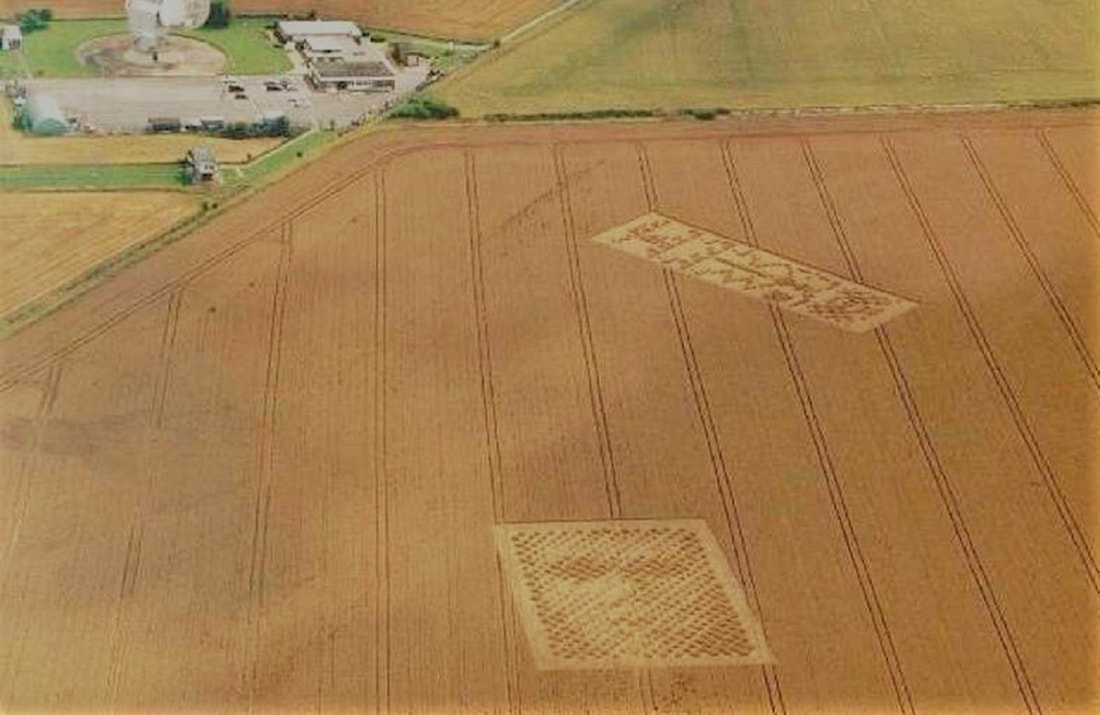 Lucy Pringle's picture of the "Sagan" formation and the "face" 2001

Perhaps another strange but possibly important formation was one that appeared in Chiseldon, England on 2nd August 1996. Although there was nothing particularly special about the formation itself at the time, a discovery made by a man in the United States eight years later brought it back into the public light, and it should be noted that when investigators had looked at the crop formation case, it appeared, at least to them, this was one of the more “genuine” cases and not just a simple hoax (genuine cases, for example, tend to show higher than usual levels of energy and even radiation).

In September 2004, while out hunting deer in the desert in the United States, very near, coincidentally or not, to the area where the alleged Roswell craft came down in 1947, Robert Ridge found a rock that upon closer inspection had the exact same pattern on it as the crop circle that appeared in England in 1996.

Ridge also discovered that the rock had magnetic qualities to it and would turn clockwise or anti-clockwise depending on which way it was facing.

When the Roswell Rock and the Chiseldon crop circle were “overlapped” using modern technology – they matched perfectly – they were perfectly to scale in every way. Further examination of the rock also confirmed that it was not native to where Ridge had found it, that the rock was solid and could not have been penetrated and had a magnet placed within it, and that the pattern itself after close examination was determined to have been done with precise laser tools.

​The “problem” with this last piece of information, depending on your perspective, is that the rock has also been determined to be of a “considerable age” – even ancient. The video below looks at the Roswell Rock in a little more detail.
Is this particular pattern of some importance? Skeptics have only offered two alternative theories – one that both are elaborate hoaxes which, even for a skeptic, this is highly improbable given the number of factors needed to have happened, or that it was pure co-incidence – which is even more unlikely.

While some of the alleged crop formations are undoubtedly hoaxes, others can’t be so easily written off as such. Indeed just some of the skill involved in how the crops are bent is beyond what most people can achieve (most "genuine" crop circles seem to show the crops folded as opposed to hoaxes where the crops have been snapped) – not to mention the intricate designs and mathematical and binary knowledge needed in some of them.

​In 2010 in Wiltshire, England, a student claimed they had recorded two very bright lights engaged in the process of forming a crop circle. You can view that footage below and see what you think. Check out the videos below that, a documentary on the crop circle phenomenon. 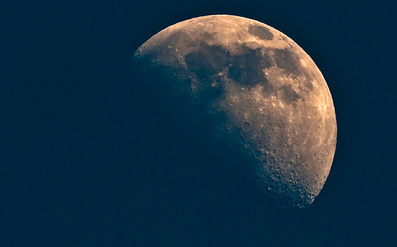 ​ The Moon –What Is On The Dark Side And Is It “Too Perfect” To Be  “Real?”
There are many theories on what the moon is and how it formed,  you might be surprised as to some of them....