Gnome-Like Mischievous Entities Wreaking Havoc! Just What Was Inside Those Planes?

It is probably safe to say that most of us are familiar with the 1984 blockbuster movie ‘Gremlins’ – the tale of little green monsters that terrorize residents in small-town America one not-so happy Christmas. While that movie is completely fictional, as bizarre as it seems, accounts of “strange little green men” were made with relative regularity by aircraft pilots during World War Two (as mentioned – albeit tongue-in-cheek style – in the movie), who would “cause havoc” with their flight instruments and navigation equipment. In fact, some accounts even go back further than that.

​It was more specifically British Air Force pilots who first began to speak of these strange beings. Some even claim that the word gremlin comes from an old English word, greme (meaning to annoy), which was often used to describe a gnome-like demon of English folklore. By the age of aviation, these gnome-like creatures appeared to have taken an interest in airplanes, as many pilots would openly (at the time) state to the public. 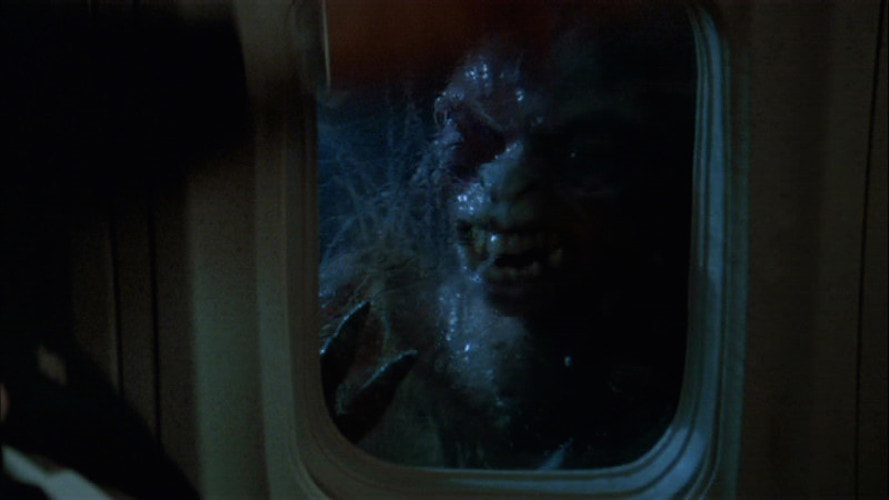 Although this is from a movie, is this the kind of creature that many pilots of World War II claim they witnessed?

"Gremlin" Incidents Of The Early-Twentieth Century

One of the first mentions of these creatures by such an air force pilot, appeared in the ‘Spectator’ newspaper, sometime in the 1920s. The article (in part) states:

“The old Royal Navy Air Service in 1917, and the newly constituted Royal Air Force in 1918 appear to have detected the existence of a horde of mysterious and malicious sprites whose whole purpose in life was to bring about as many as possible of the inexplicable mishaps which, in those days as now, trouble an airman’s life!”

These seemingly outlandish claims only gained traction, certainly among pilots, when a British pilot crash landed his plane into the waters off the British coast in 1923, and then went on to state that the cause of the crash was down to a “tiny creature which had followed him aboard his plane!” He would go on to describe how it had caused mayhem with his flight controls and ultimately caused him to crash into the waters below.

​One particular incident however, stands out significantly from the others, if only because of the deaths attributed to it. Before we look at that though, check out the trailer to the aforementioned ‘Gremlins’ movie below.
Although many sources now attribute the claim to the 1988 book ‘World of Mysterious Phenomena’ by Charles Berlitz, author and researcher, John Keel wrote about the same story in his 1971 publication, ‘Our Haunted Planet’ – he in turn would attribute the story to Jerome Clarke, who wrote of the incident in Flying Saucer Review around 1954. While there are some who state the account to be inaccurate, or even an amalgamation of several air crashes of the period, that way of thinking is surely as much of a stretch and ambiguous as blindly accepting some unknown “entity” wreaking havoc in the air without investigation.

In the Summer of 1939, while the Second World War was beginning to become a grim reality in Europe, a US military transport aircraft left the runway at Marine Naval Air Station in San Diego, California, destined for Honolulu, Hawaii.
Around three hours later, several panicked calls for help came via the distress call, before absolute silence took over. Even more bizarre was the sight of the plane coming back to the same airfield it had set off from shortly after the calls for help.

The aircraft was quickly approached by emergency teams and Air Force personnel, who after forcing their way into the plane, found each crew member dead, including the co-pilot, who it seemed had managed to hang on to life just long enough to land the plane. Keel would quote Jerome Clarke’s ‘Flying Saucer Review’ account as follows:

“Each of the bodies carried large, gaping wounds, and the outside of the ship was similarly marked. Air Station men who touched parts of the craft came down with a mysterious skin infection.

One of the most puzzling aspects of the whole affair was the .45 automatics carried by the pilot and co-pilot as service pieces had been emptied, and the shells lay on the floor. A smell of rotten eggs permeated the atmosphere inside the plane - mysterious skin infections and rotten eggs odours (hydrogen sulphide) are phenomena familiar to all UFO researchers. It would seem that the transport was attacked – apparently without provocation – by some sort of strange aerial intruder.”

For his part, Clarke retrieved the account from a 1939 San Diego newspaper, although there is very little else known of the incident – perhaps that is a purposeful decision. You can read about this in a little more detail here. 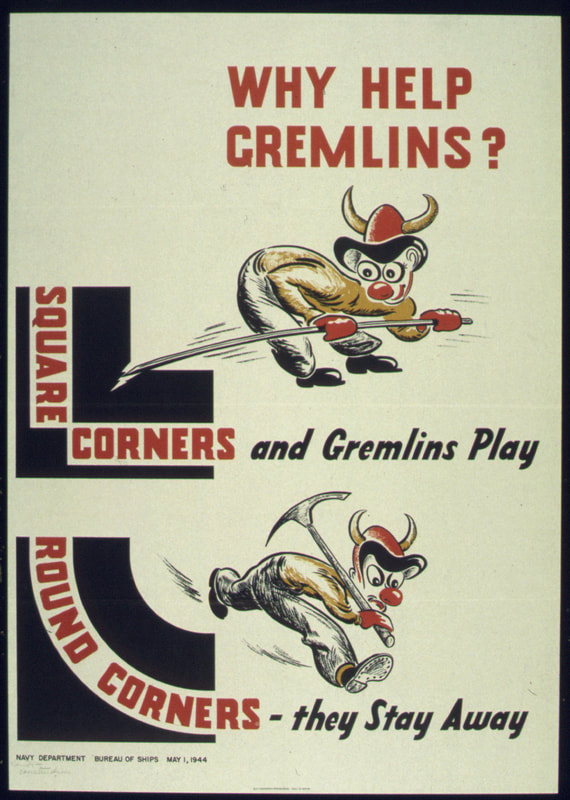 A typical leaflet of the day (circa 1930s/40s) showing how serious the notion of Gremlins were taken!

Accounts Of The Second World War

As the war went on into the 1940s, more and more sightings of the strange creatures were reported. A great many of these sightings were made during high-altitude flights, which were more often than not reconnaissance missions, and during which, the pilots tended to operate in much colder conditions. Whether these conditions favored these bizarre and mischievous creatures, or whether the creatures were a result of such conditions is open to debate, still today, for many.

The Ministry of Defense would take these sightings so seriously as to promise an investigation, even going as far as to issue official advice to all military personnel and declaring these strange creatures “the work of the enemy!”

It was only when the interaction between American Allied pilots and their British counterparts, that it became apparent that these creatures seemingly favoured no side in this latest global conflict - a notion confirmed following the war when German pilots would talk of the same creatures causing them the same problems as their one-time enemies.

Perhaps one of the strangest of these encounters during the Second World War happened to an American pilot known only as “L.W.”, who while piloting a Boeing B17 aircraft, began to hear a strange an unnerving sound coming from the plane’s engine. His navigation equipment was also acting erratically. It was then that he saw the bizarre “entity” looking in at him through the cockpit window, hanging on to the outside of the plane as it did so.

​His description stated the creature to be a grey-green colour, with pointed ears and a mouth full of razor sharp teeth. It’s eyes also glowed a magnificent red colour. 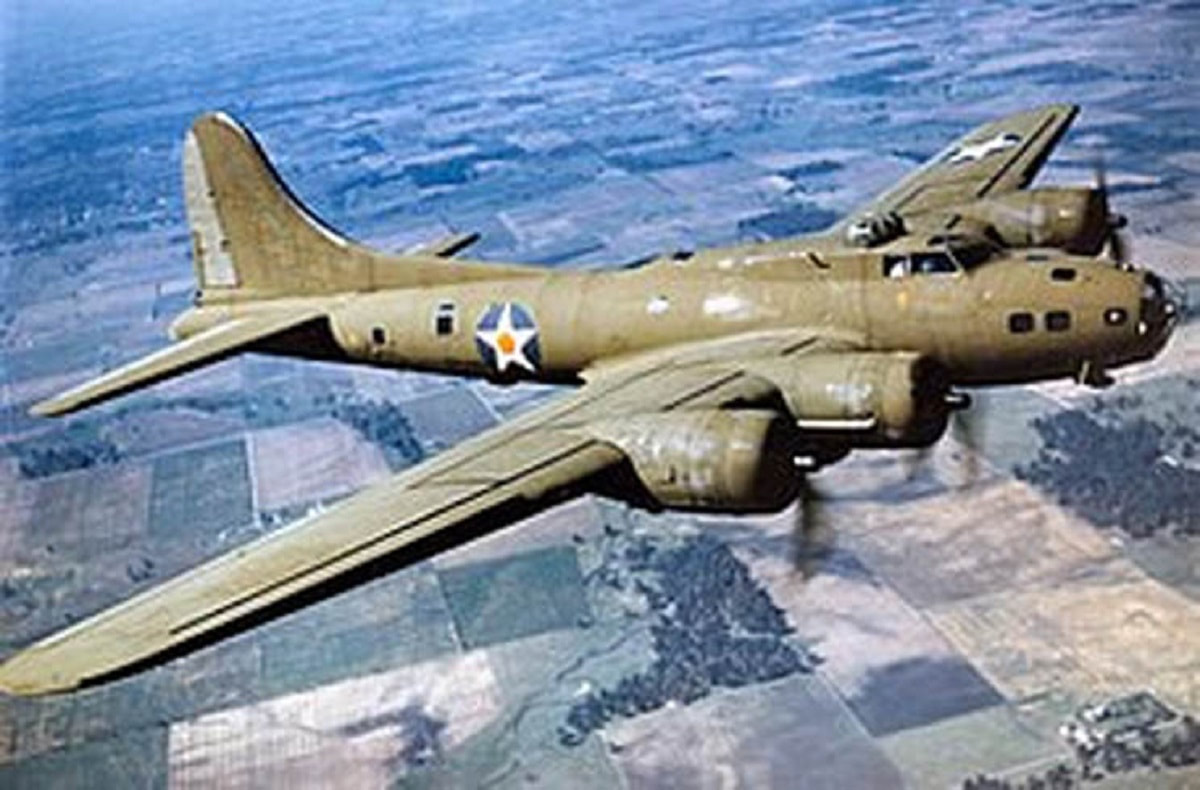 Were strange creatures attacking military planes in the skies during the Second World War?
Before the shaken pilot could adjust his mind to what he was seeing, another creature came into focus on the nose of his plane. Snapping back to his senses, he began to dive and rise the plane in a “stop-start” fashion, and much to his relief, the strange creatures lost their grip and vanished into nowhere.

Initially opting to keep the encounter to himself, it was only when a fellow servicemen stated he had seen something similar to him, that he decided to make the report official.

As the war ended, reports of such creatures began to slow down dramatically, and by the 1950s, they had seemingly ceased altogether (although it should be noted that many militaries would forbid their pilots from openly speaking of such claims at the same time the reports ceased).

Whether these strange creatures were the result of high-altitude flying, or indeed a consequence of conducting such pressured missions as they were (essentially that they were hallucinations) is open to debate for some. Although pilots for years afterwards would discard this notion in its entirety, sure with absolute certainty about what they had seen.
Their accounts as well as the reasons such sightings suddenly stopped when they did are as mysterious and intriguing as they are chilling.

You can read a little more about some of these encounters here and check out the videos below - each look at various aspects of the gremlins legends of the first half of the twentieth century. 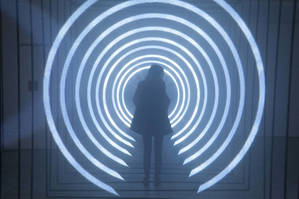 Teleportation, Abduction Or Something Even Stranger? The Bizarre Mist Vanishings!
Disappearances happen every single day, all over the world and they have done for decades, indeed, centuries. There are a plethora of reasons, theories and claims as to what is behind these disappearances, ranging from the outlandish and fanciful, to the outright dark and disturbing...