If The Chemtrail Conspiracy Is Real, Are “They” Really Trying To Kill Us Off?

In February 2014, WeAreChange.org spoke to alleged US whistleblower, Kristen Megan. In the interview (which you can see at the bottom of this article) Megan, a nine-year US Airforce veteran, stated that the conspiracy of chemtrails is very real and that it needed to stop.

Megan worked as a bio and environmental engineer, and stated part of her job was to know exactly what the US military was using, why and perhaps more importantly, what the impact would be on human health and the environment at large. 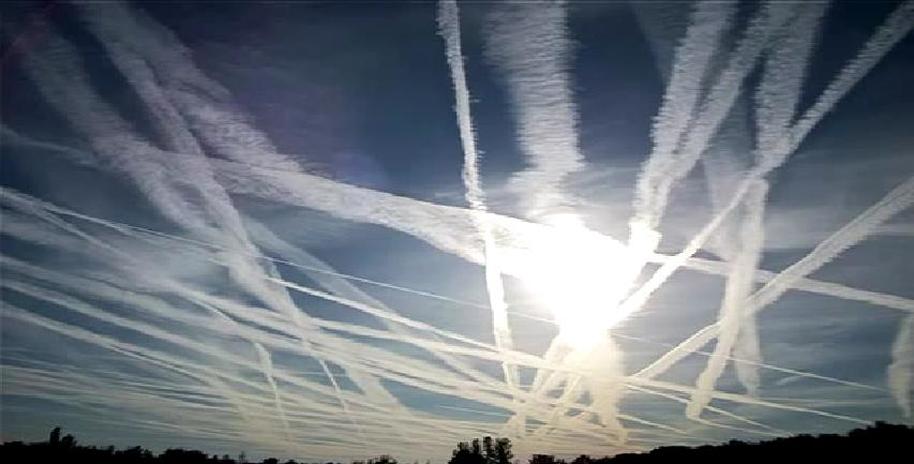 Chemtrails - or contrails which is jet fuel?
She claimed she started to notice large quantities of chemicals that did not have a manufacturer’s name connected to it and that were not tied to any particular buildings or departments (as was standard procedure).

“When I started asking questions, I started to become demonised. When I asked again and people realised I was being more vocal about it on social media, I was threatened with being thrown in a mental institution and having my daughter taken away from me!”

She has conducted extensive air, soil and water tests, and states that the pollution was much larger than it should have been and that it is far too high to have occurred naturally.

In response to people who have asked her to provide solid proof of this, she said:

“If you try to take a picture in a restricted air hanger, you will have an M-16 in your back! People are scared to come forward!”

A History Of Secret Experiments

This isn’t simply a wild statement by Megan.

In the book The American West at Risk: Science, Myths, and Politics of Land Abuse and Recovery by Howard G. Wilshire, Jane E. Nelson and Richard W. Hazlett, the statement was made that at some point in time, every community in the United States was subjected to at least some low-level military experiments. In 1977, officials admitted to having actioned a total of 239 “open air chemical and biological tests” between 1949 and 1969 alone, including in dense and built up civilian populations. You can read the hearing in more detail here.

In 2012 a lawsuit was brought in St. Louis in the United States, regarding the US government’s admission in 1994 to having conducted secret chemical testing on citizens in the area in the 1950s. It was stated the tests were carried as part of the cold war, with St. Louis chosen as it “was similar to some of the Russian cities the military thought it might have to attack.”

It didn’t make matters any better that they appeared to have sprayed the chemicals in predominantly black areas of the town. Citizens, as well as city officials, were told at the time that they were testing a “smokescreen” that would protect US citizens in the event that “the Russians attacked!”

St. Louis Community College Meramec sociology professor, Lisa Martino-Taylor, has conducted extensive research in the area in relation to the events, and her findings seem to suggest the possibility that radioactive particles were mixed with zinc cadmium sulphide – which if true would have much more harmful and long-reaching side-effects. Incidentally, one of the companies named in the suit is Monsanto, who are a conspiracy in their own right – you can read the basics of that here.

In 2007 KSLA News 12 in Arkansas followed an investigation into the chemtrails conspiracy by Bill Nichols. He would state:

“It seemed like some mornings it was just crisscrossing the whole sky.  It was just like a giant checkerboard!”

He said that while conventional wisdom states that these are contrails (jet fuel) and nothing sinister, Nichols argued that these trails do not fade away as standard contrails do, and instead are visible for quite some time.

Furthermore, Nichols stated that he could even see the haze fall to the ground on some mornings. He consequently provided samples to be tested. The results were rather startling as barium was found that was three times the toxic level as stated by the Environmental Protections Agency (EPA). You can read the full story here.

​As recently as 2014 residents in Arizona were pushing to have the “chemtrail conspiracy” investigated. At a town meeting on the subject, one resident stated:

“I think that all of us for a long time have known that we’re being sprayed. This is not contrails - contrails are very short. Chemtrails go along the sky. Really, we are being sprayed like we’re bugs and it’s really not okay!”

You can read the full article here and watch the meeting in full below.

So, in relation to Kristen Megan’s accusations, and despite the fact that the “chemtrail conspiracy” has been “debunked” by mainstream scientists a number of times as being nothing more than jet fuel, you have to ask, if they lied about their actions before, why would they not lie about their actions now?

​As just another example, click here to read a recent article that speaks of links between alleged chemtrails and a “mystery flu” seemingly afflicting United States citizens.

It isn’t just a practice that is used in the United States either. In 2013 Australia stated they would “forcibly vaccinate” its citizens through the use of chemtrails, and ChemtrailUK state on their website that they intend to “present hard, irrefutable evidence that this illicit, global crime is not merely a "proposal" but is indeed happening today.” 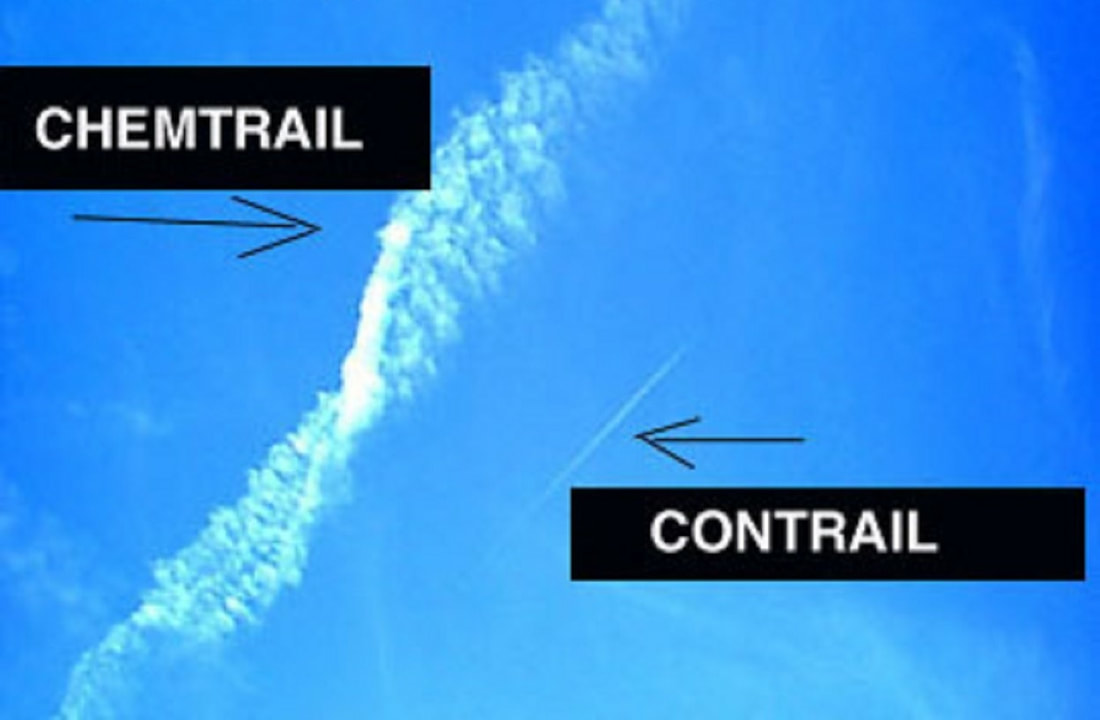 This picture by Rick Moors allegadly shows the difference between a chemtrail and a contrail!
There is also a lot of truth to weather control and modification. In anticipation of the 2008 Olympic Games in China in 2008, and in particular it’s opening ceremony, weather control was used openly by the Chinese government. Called cloud seeding, over a thousand rockets were fired into the sky in an effort to “disperse rain” ahead of the big day – you can read more about that here. Incidentally, this has become a regular occurrence in China, where weather control is often used ahead of public holidays and important events.

So, if the Chemtrails conspiracy is real, why are they doing this?

Some believe it is to gain an advantage in agriculture (Edward Snowden speaks about that here), whereas others, understandably given the aforementioned proven cases in the past, believe they are part of experiments being done on citizens without their consent. Some though believe they have a much darker purpose – one that has only one end game – to control and ultimately reduce the world’s population.

​Depopulation is a conspiracy within itself – diseases such as HIV/AIDS, Ebola and more recently the Zika virus have all been sighted as efforts to depopulate the planet – you can read arguments for and against the recent Zika virus conspiracy here. Chemtrailing it would seem is merely a part of this overall goal of reducing the Earth’s population.

The Significance Of The Georgia Guidestones

Perhaps the proof of this intent can be found in the Georgia Guidestones, a strange monument that seemingly appeared out of nowhere in 1980 in Elbert County, Georgia – the work of R. C Christian (a pseudonym).

Sometimes referred to as the “American Stonehenge” the Guidestones comprise of ten large granite blocks. They feature guidelines in eight different modern languages (English, Spanish, Russian, Chinese Swahili, Hindi, Hebrew and Arabic) – these are known to some as the “Ten Commandments of the New World Order” – and they appear to lean heavily, some claim, on the depopulation of the planet.
There is also a shorter message on the top of the stones in Babylonian, Classical Greek, Sanskrit, and Egyptian hieroglyphs – four prominent ancient languages.

The fact that they are made of granite indicates that they were designed to remain in place for thousands and thousands of years, while their positioning (they are aligned with celestial bodies and the sun) suggests they are the work of a secret society, using ancient or “secret” knowledge. ​The stones, in part because of this, have been the subject of persistent graffiti attacks and vandalism over the years.

Graffiti on the Georgia Guidestones
The debate will rage on and on regarding the issue of chemtrails and their purpose, and it is easy to see where the mistrust comes from. It would also not be at all beyond imagination that there is a large degree of truth to the chemtrail conspiracy. You can read a little more in-depth about chemtrails here, and check out the interview with Kirsten Megan below, as well as just two videos of many you will find on You Tube regarding the subject. 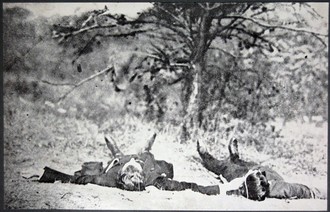 ​The Crazy Pig Lady, The Reverend And The Mistress – The Still Unsolved Hall-Mills Murder of 1922
Considered the murder case of the early twentieth century, the killing of Reverend Hall and Eleanor Mills captivated the whole of the United States....