The Pyramids Of Giza – They Are Not Tombs, So Could They Really Be An Ancient Power Plant?

A huge part of the evidence offered as proof of the Ancient Astronaut theory is the wealth of megalithic structures and buildings all over the planet. Buildings that because of their sheer size and precision “laser-straight” dimensions and cuts into solid rocks of various kinds, have led many to suggest electricity was not only available in ancient and pre-historic times, but it was utilized.

Of course, that electricity has to come from somewhere – there has to be a “power plant” of sorts to generate and distribute it. So could the Pyramids of Giza, ultimately, have been exactly that?

In our article on Edgar Cayce, he stated that the ancient Egyptian civilization was essentially started by those that escaped from Atlantis – if we for one moment assume that Atlantis was a real and advanced society that was lost in some disaster or another, then it is safe to assume if there were survivors they would have knowledge of such technology and would use it to rebuild their society.

In his book, The Giza Power Plant – Technologies Of Ancient Egypt, Christopher Dunn argues that the world-famous Pyramids of Giza were not tombs – they were power plants that allowed the ancient Egyptians to use electricity as we do today. 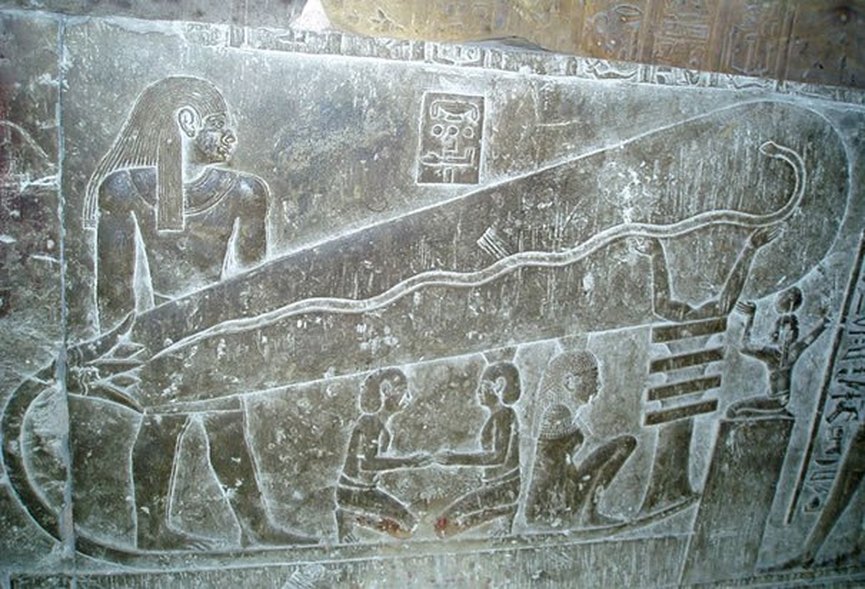 The Dendera Bulb - does this show an ancient electric light bulb?

Crazy? Not really – especially when you look at the many other pyramids and similar structures that are being discovered around the world with the Bosnian and Arctic Pyramids being just two other examples, and indeed the seeming benefits of the Pyramid structure itself, it seems at least possible. Certainly no crazier than thinking the ancient Egyptians and other civilizations alike really did build those terrific structures using wooden logs, ropes, and no more technology than their bare hands!

For now, we will leave the “how the Pyramids were built” question and look purely if there is a case for them being ancient power plants.

Their location for example, right next to the great River Nile, would have provided an ample water supply needed to produce electricity.

The outside of the Pyramids were “encased” within white tufa limestone that was so precisely and tightly fitted not even a razor blade could fit between any of the huge blocks. White tufa limestone has high insulating properties and does not contain magnesium – this casing likely prevented electricity that was being produced inside the Pyramid from escaping without control.

The stone blocks inside the pyramids themselves are made from a form of limestone that contains both crystal and metal. Crystal, as we are only really discovering today, is a great electrical conductor and the presence of the metal suggests that the goal was to achieve maximum transmission of power.

Lower down, the shafts are made from granite which is an excellent conductor and it’s radioactive substance permits the ionization of the air. 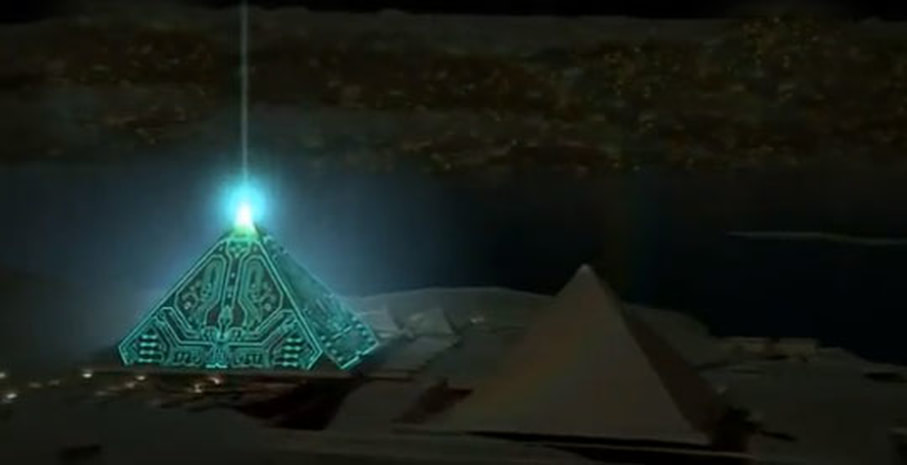 Could the Great Pyramid really have been an ancient power plant?

The Earth's Vibration - The Key To "Free" Energy?

Dunn’s theory on how the Pyramids were utilized to generate electricity are remarkably similar to how the aforementioned Edgar Cayce described the people of Atlantis as being ”skilled in the application of electrical forces and influences.”

Dunn sighted that the “King’s Chamber” was the core of the process, and that essentially the Pyramids “responded sympathetically with the earth’s vibration” and then converted that energy into electricity. It is worth noting that Nikola Tesla thousands of years later, in particular, his Colorado Springs experiments, was looking at very similar concepts. Free energy from the Earth itself. Why his work has not been followed up is a debate for many in itself.

Water from the Nile was pumped into the King’s Chamber, entering underneath the Pyramid. This would cause pressure and essentially cause the Pyramid to “vibrate” – incidentally there is evidence of water erosion on the floor of the King's Chamber.

Dunn went on to suggest that these two chemicals were poured down through the shafts and then mixed together inside the Queen’s Chamber, triggering combustion. When these two liquids are brought together, a chemical reaction occurs, and a product of that chemical reaction is hydrogen.

Dunn suggested that the hydrogen gas traveled from the Queen’s Chamber into the King’s Chamber, where the vibrations from the subterranean pool energized the hydrogen atoms, transforming them into a microwave energy beam. Remember the granite would aide in this final part of the process.

Were the Pyramids of Giza and the ancient Egyptian civilisation more advanced than we think?

Electricity In The Ancient World?

So could the ancient Egyptians really generate and use electricity?

The Dendera Bulb is, to some, proof that they could. The stone art (pictured at the top of this article) seems to show someone holding what looks like a modern light bulb that is attached to a coil of sorts. What gives this interpretation more credibility, given that the inside of the Pyramids had to have been lit up at times, is the fact that there are no “soot marks” in any of these ancient structures, as there surely should have been had the Egyptians used flame torches to light their way.

Even the articulate stonework and carvings themselves are regarded by some as being too precise to have been made using anything other than fine but powerful machinery – machinery powered by electricity.

Many detractors from Dunn’s and the Ancient Power Plant theory in general state that if the Pyramids were power plants why would they be sealed up, even booby-trapped? However, Dunn theorized that there was an explosion – a disaster that forced the Pyramid to be “shut” and sealed.

​When Dunn went back to the Pyramids of Giza in the late 1990s to film a documentary, he inadvertently came across what he claims is proof of his theory, when he discovered the grand gallery was made of granite and not limestone as most literature had suggested. 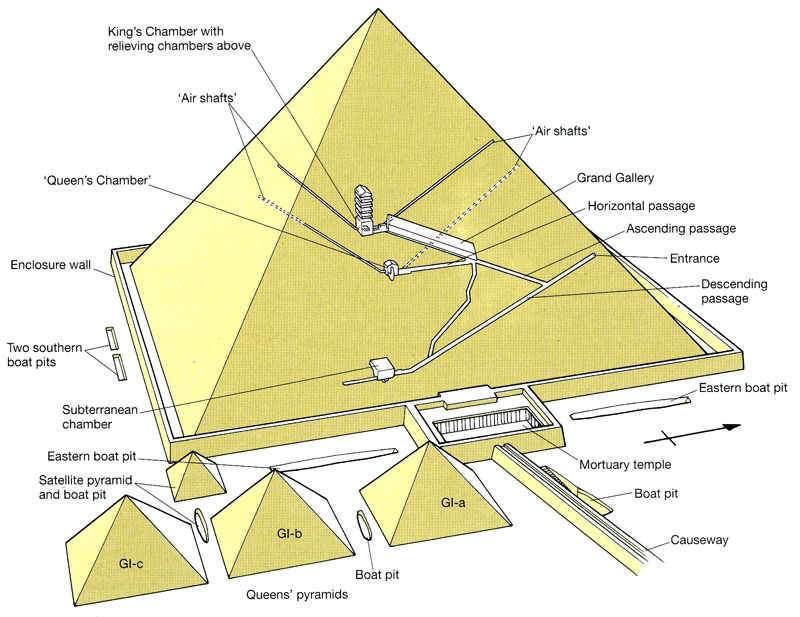 In the book Forbidden History Dunn elaborates in the article Return To The Giza Power Plant on why his discovery was so significant.

“In all the literature I had read, the gallery was described as being constructed from limestone. But here I was looking at granite! I noticed a transition point farther down the gallery where the rock changed from limestone to granite. I scanned the ceiling and saw, instead of crumbling rock, smooth, highly polished granite. This was of great significance to me. It made sense that the material closer to the power center would be constructed of a material that was more resistant to heat!

I then paid closer attention to the scorch marks on the walls. There was heavy heat damage underneath each of the corbeled layers, for a distance of about twelve inches, and it seemed as though the damage was concentrated in the center of the burn marks. Then, visually, I took a straight line through the center of each scorch mark and projected it down towards the gallery ramp. That was when chills went down my spine and hair stood out on my neck. The line extended in alignment with the slot in the ramp!”

In ‘The Giza Power Plant’ I had theorized that harmonic resonators where housed in those slots and were orientated vertically towards the ceiling. I had also theorized that there was a hydrogen explosion inside the King’s Chamber that had shut down the power plant’s operation. This explosion explained many other unusual effects that have been noted inside the Great Pyramid in the past, and I had surmised that the explosion had also destroyed the resonators in the great gallery in a terrible fire!”

Only now, under the video camera’s intense light, could Dunn see for himself the charred and scorched evidence that seemingly supported his theory.

Does this then not only prove that the Pyramids at Giza were once working and operational power plants but does it also explain why they were ultimately sealed up? We, after all, have done the same thing with Chernobyl for example!

​The reactor was sealed under an impenetrable metal dome not to be entered for what will probably be hundreds, if not thousands of years. Might the ancient Egyptians have done the same following this supposed explosion inside the chamber?

Of course, who is to say that the Egyptians sealed it themselves? Their civilization came to an end – was essentially wiped out – so might the Pyramids have been sealed by someone else and if so, why?

​Check out the short videos below for further viewing on the theory of the Giza Power Plants. 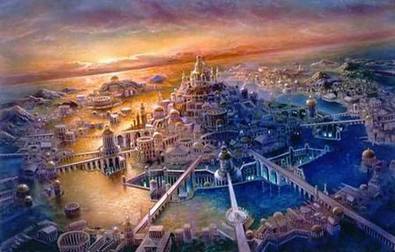 ​ Edgar Cayce, The Atlanteans, Lost Technology, And The Hall Of  Records Under The Sphinx’s Paw?
Edgar Cayce made many predictions, but is he correct about what is  under the paw of the great Sphinx...?