From The Ant People And The Hopi Tribe to Admiral Richard Byrd – How Credible Is The Hollow Earth Theory?

Conventional wisdom suggests that the Earth is essentially a solid spherical mass, with an inner core of solid iron encased in a layer of molten iron, followed by stiffer mantle and the crust, before heading to the surface on which we all live.

However, although this theory is almost universally accepted as absolute fact, it is only an educated guess, with no solid proof to back it up. The fact is that we have never been anywhere near to the center of the Earth.

So with that in mind, theories that state the Earth is, in fact, hollow, and even able to support life, should be treated the same way as the widely accepted aforementioned theory – as you might suspect though, most scoff at this notion and dismiss it entirely without any further investigation.

​However, throughout history many prominent and respected minds, thinkers, and even military veterans have presented detailed theories as to what lies deep within our planet. When these theories are combined with the numerous reports and texts that make reference to living beings and entire civilizations that live and sometimes “come up from inside the Earth!”, not only appear to warrant further study but when viewed with an unbiased mind, suggests there may be more evidence to support the Hollow Earth theory than not. 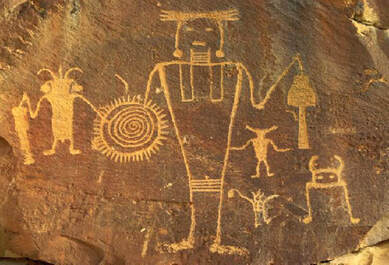 One of the many cave and wall paintings of the Hopi Tribe depicting the Ant People - were they the Anunnaki?

Both sides of the spectrum seem to agree that the moment of inertia of the Earth indicates that there is a concentration of mass around the very center of the planet, with further research along with seismic data appearing to show that this mass to be a solid sphere.

Hollow Earth theories vary on what exactly this mass is, with some stating it to be a magnetic core while others suggesting that it is a central sun (this is particularly interesting as modern science seems to suggest that the center of the Earth could indeed be as hot as our Sun).

In ancient times Buddhists believed that the Earth was hollow and that it housed a race of “super men and women” who would venture to the surface via tunnels. Buddhists even kept guards at the entrances to these tunnels to the inner Earth – said to be in Tibet.

In other Tibetan, Indian and Hindu texts, an ancient kingdom called Shambhala Is described – said to be located “deep within inner Asia”, while other texts from India such as the Ramayana speak of the Avatar Rama, a great blue being from deep within the Earth.

In the 1600s, as western cultures were beginning to come out of the dark ages where science and free thought was frowned upon by the Catholic church (with many scientists and philosophers murdered by the church as heretics), there were prominent and influential figures who had come to their own conclusions about the Earth and if it was hollow or not. It should also perhaps be noted that although these “thinkers” were no longer forced to operate in secrecy under the threat of death, they were still kept a very close eye on by “society’s elites.”

Edmund Halley, perhaps best known for his discovery of Halley’s Comet was just one who theorized that the Earth was indeed hollow during this time. Using much of Issac Newton’s work on gravity to prove his theories, he claimed that the Earth was hollow and had a shell around five hundred miles thick, had an “innermost core”, and was capable of supporting life. He went on to state that an atmosphere filled the space inside the Earth and that the outer shell and the inner core both had their own magnetic poles that caused them to rotate at different speeds.

Leonard Euler, a Swiss physicist, also proposed that the Earth was hollow during his time in the 1700s. Like Halley, he claimed that the Earth had a very thick outer shell but at its core was a central sun – this sun he claimed provided heat and light for the inhabitants of the inner Earth.

​Interestingly, Euler went on to claim that the inner Earth could be accessed through huge entrances at both the North and South Poles – it is claimed by some people today that such appliacations as “Google Earth” have purposely attempted to hide these entrances, although there are some photographs that appear to show the opening that Euler claimed. 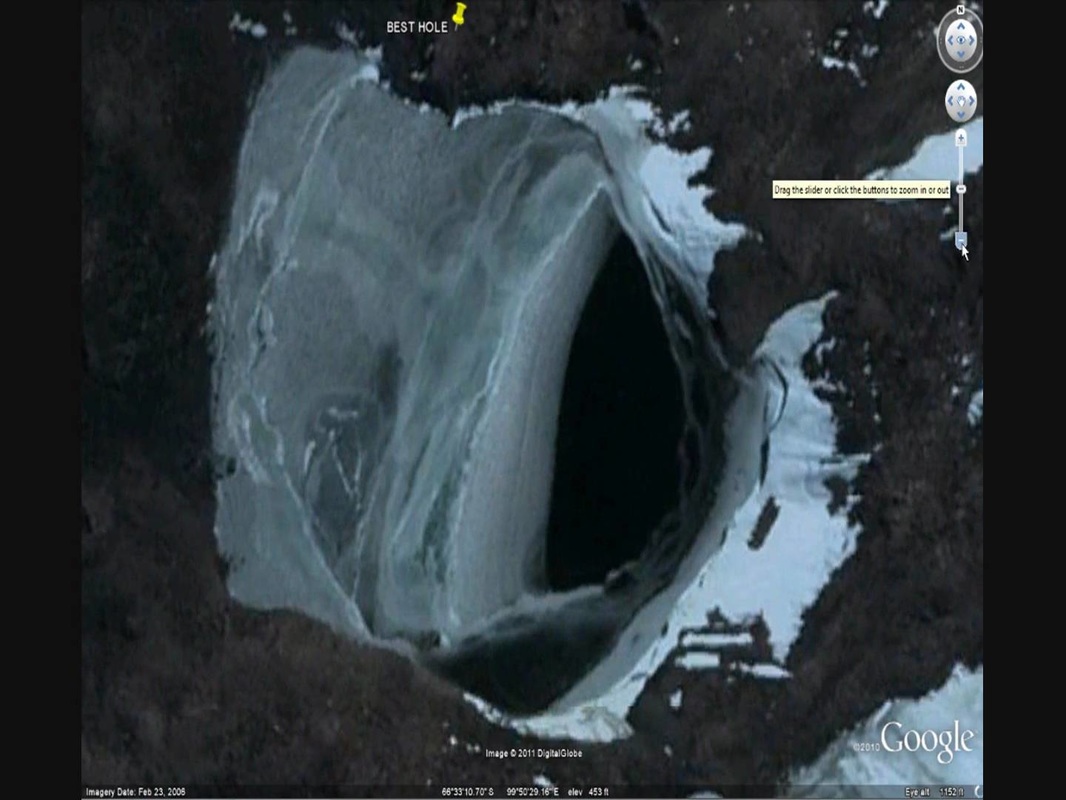 Does this Google Earth image really show an entrance into the inner Earth?

Operation Highjump And The Claims Of Admiral Richard Byrd

As recently as the 1940s there have been claims of an inhabited inner world – perhaps none more high profile than those made by Admiral Richard Byrd following Operation Highjump in 1947.

Operation Highjump was a multinational effort led by the United States to establish a base at the North Pole. On 19th February 1947, Admiral Byrd led a squadron of planes over the North Pole. He claimed that he could see vegetation and animals that “shouldn’t have been there” and ultimately that he saw a huge opening that led inside the Earth.

However, perhaps even stranger, Byrd stated that out of nowhere there were strange “flying crafts” that got so close to them that they could see what looked very similar to “swastika” markings on them. His airplane would not respond and he was essentially in “an invisible vice grip of some kind!”

Byrd went on to say that he was taken inside the Earth where he noticed “great lakes and vegetation” and that the inner Earth had an inner Sun. He was greeted by the beings that resided there. They were, he claimed, concerned about humans in general but particularly about nuclear weapons that were building up around the planet – interestingly there have been numerous UFO sightings in and around both nuclear power plants and on grounds where nuclear weapons are housed. You can read what are claimed to be Byrd’s diaries of the events here.

​It may be worth noting that there have long been rumors that Hitler himself had a keen interest in establishing a base at the North Pole with the objective being to find the entrance to the inner world, believing that extraterrestrials or an advanced race would be found there. You can read a little more about the Nazi regime’s interest in such things here. 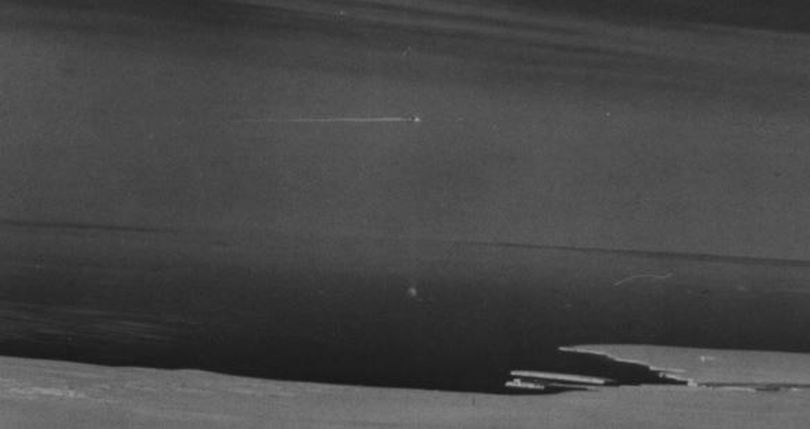 One of the many photos from "Operation Highjump" - is that a saucer shaped crafted in the middle of the picture?
On 5 March, 1947 the El Mercurio newspaper of Santiago, Chile appeared, with the headline article ‘On Board the Mount Olympus on the High Seas’ in which it quoted Byrd saying  “Adm. Byrd declared today that it was imperative for the United States to initiate immediate defense measures against hostile regions. Furthermore, Byrd stated that he “didn’t want to frighten anyone unduly” but that it was “a bitter reality that in case of a new war the continental United States would be attacked by flying objects which could fly from pole to pole at incredible speeds.”

Like Euler two hundred years earlier, he also claimed that there were huge entrances to the inner Earth at both the North and South poles.

He repeated these views several times, including at a press conference in front of the world’s media before he was hospitalized and ultimately forbidden from holding press conferences on the subject again.

Byrd died in his sleep in 1957 – maybe predictably, maybe not, there were quiet claims of foul play, although his official cause of death was a “heart ailment.” Perhaps also worth checking out is this article here concerning Bryd’s son (Richard Byrd Jr.) who was six years old in 1947 and had accompanied and witnessed his father’s claims – he was found dead mysteriously in a New York warehouse and had, by all accounts, had various "trying times" during his life. 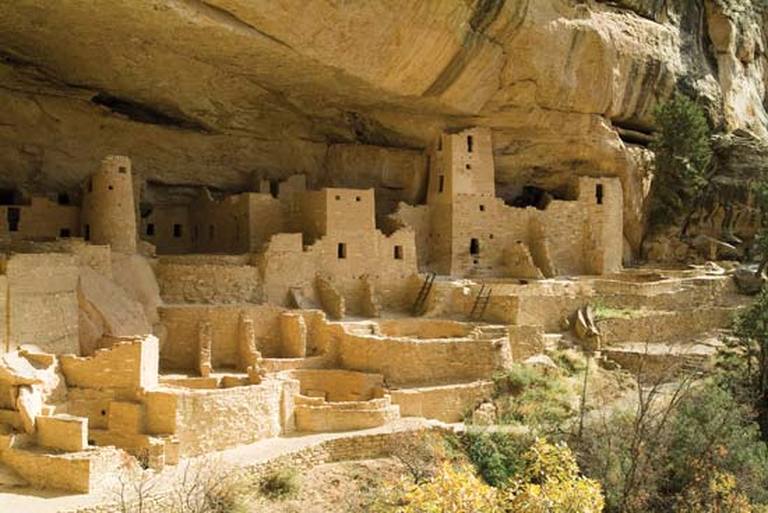 The Legends Of The Hopi Tribe

Perhaps the most interesting of all the Hollow Earth claims, are those made by the Native American Hopi Tribe, who have lived upon the plains of northern Arizona for thousands of years.

According to their ancient writings, it was here that their gods instructed them to settle and build up villages in the rock – which look very similar to modern apartment blocks.

​Here they were taught to grow corn, beans, and squash and thrived as a civilization.

​Key to the Hopi’s existence was the Ant People, who had guided their tribe to safety during two cataclysmic events.
In the “First World” (which was destroyed by fire) and the “Second World” (that was destroyed by ice) the tribe had each time been guided by a strange cloud during the day and a “moving star” during the night until they came to the god named, Sotuknang, who in turn led the Hopi to the Ant People.

​​The Ant People had lived on Earth since the “first time” and now housed themselves deep within the planet. They offered the Hopi safety until it was safe to return to the surface of the Earth, and also taught them skills such as food storage, rationing and how to sprout beans inside the cavern under the ground.
Not only is this another reference to the Hollow Earth theory, but it also lends a certain amount of support to the Ancient Astronaut theory and the Anunnaki. The Hopi word for Ant is “Anu” – Anu was a Babylonian sky god – the Anunnaki. Not only this but Naki in Hopi, means “friend.”

Ant Friend – Anu Naki (Anunnaki) – coincidence? Or evidence? We should perhaps stress that not everyone agrees with that interpretation.

Check out the videos below concerning Admiral Richard Byrd and Operation Highjump - a simple search of YouTube will bring up ample results for further viewing on the Hollow Earth theory. 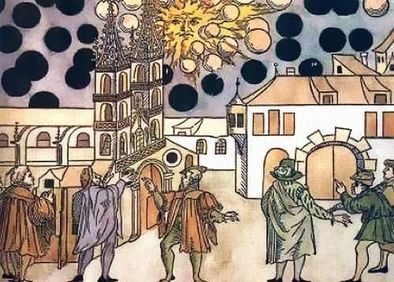 ​ William Robert Loosley, The Sky Battle Over Basel, Sister Mary Of  Agreda – Recorded History Is Riddled With UFO Phenomena
The earliest recorded UFO sighting in human history goes back to 1500  BC!