On 4th October 1871, undertaker William Robert Loosley had an experience that not only would he never speak of, but his written account of it wouldn’t be discovered for over a hundred years, when Loosley’s great-great-granddaughter discovered it locked away in his desk drawer.

Loosley was a highly respected member of his High Wycombe community and not, at least according to some, some one to tell tall tales.

According to his writing, he had awoke in the early hours, a little after 3am. Not being able to settle, he opted to walk in the garden to get some fresh air and clear his thoughts.

Once outside, he noticed a light that “looked like a star but was brighter than the full moon” move across the sky followed shortly by what sounded like a “huge clap of thunder!”

Loosley followed the light which was descending steadily to the ground, moving side to side as it did so and occasionally stopping in the air before continuing downwards again. It appeared to land in woodland near to his home.

Unable to put what he had seen out of his head, as soon as it was light enough, Loosley set off to the woods where he had witnessed the strange light come to Earth. It took some time, but eventually he found what he thought he was looking for when he poked “something metallic” with his walking stick. He uncovered away the leaves and looked down upon a metal box that “was about eighteen inches high and covered with curious knobs!”

​Then, without warning, the metal box sprang into life. Loosley would write:

“With the sound of a well-oiled lock it opened what looked like an eye, covered with a glass lense and about an inch across, seconds later another eye opened and sent out a beam of dazzling purple light!”

By the time a rod-like instrument shot out of the box, Loosley decided he should leave, but as he did so, the box followed him – leaving a trail of three small ruts in the soft ground as it did so. When he came to a clearing he noticed that the whole place was criss-crossed with the same type of ruts, as if the box had been moving here all night.

Behind him the box was stationary again as it shot out a clawed instrument into the undergrowth. He would continue:

“The purple light shone on the corpse of what seemed to be a dead rat. Then the rod sprayed liquid on the body and the rat was pushed inside a panel that opened on the side of the machine.”

Now very close to panic, Loosley dropped his walking stick and fled as fast as he could. The machine picked up his stick to examine it before seemingly “chasing” him in the direction of what seemed to be another metal box in a second clearing in the woods.

It was here that Loosley noticed again a bright light in the sky above him, yet now it seemed to be signalling to him with it’s lights. He attempted to memorise the sequence but before he could do so, the “moon-like globe” vanished from the sky.

Loosley made his way quickly back home, committing what he had just witnessed to paper. That same night he again noticed a bright light steadily making it’s way down to the clearing in the woods where he had been that morning. After a short while, the light this time rose out of the clearing and shot off at speed and disappeared into the night.

Writer, David Langford eventually wrote a book on the events when Loosley’s papers were finally discovered, titled An Account of A Meeting With Denizens Of Another World. He would later write of the manuscript:

“The manuscript has withstood every test of authenticity. It is clearly not a fabrication, because the man’s death in 1893 rules out the possibility that he could describe the scientific concepts apparent in this tale!”

Had Loosley discovered what appeared to be a scouter probe, sent to Earth on a fact-finding mission? It certainly looks that way, although in later years the story appeared to be revealed as a hoax. Make of the account what you will.

​Of course William Robert Loosley’s experience is just one of many, many strange experiences that, had they happened in modern times, would have been instantly labelled a UFO incident. 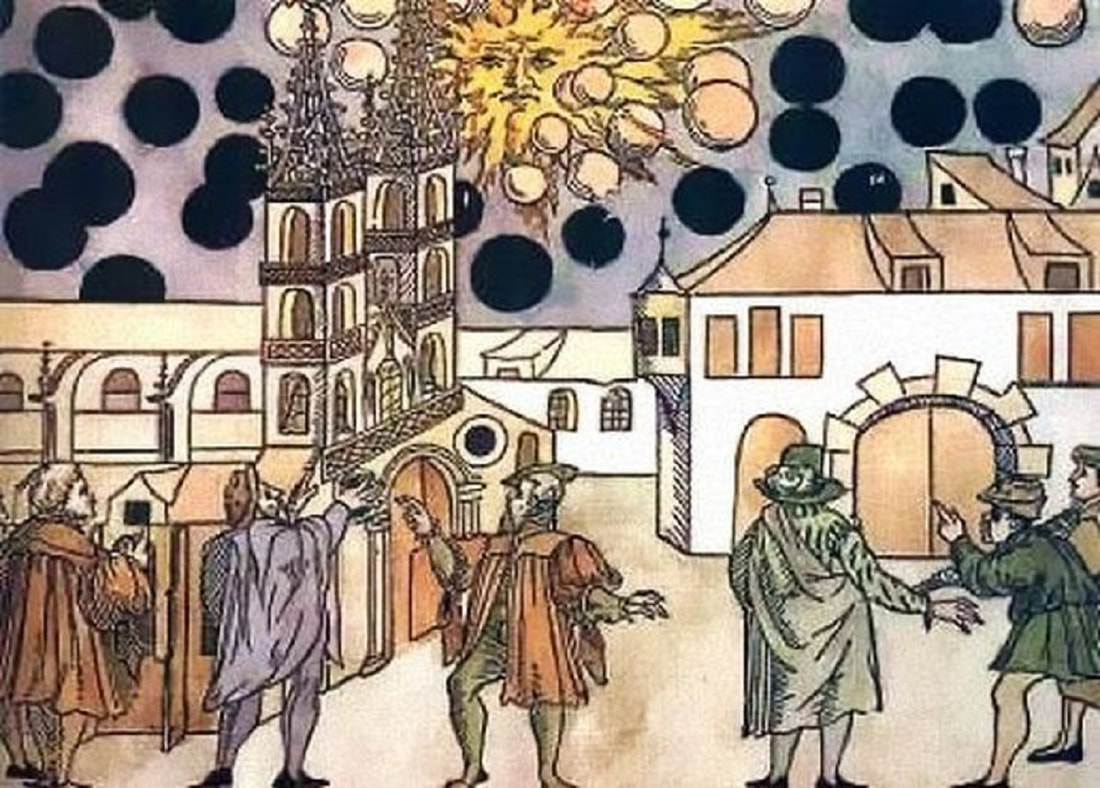 On 7th August 1566 in Basel, Switzerland, not only was there a sighting of a UFO, but many of them – and stranger still they appeared to be engaged in a battle. The incident was recorded by Samuel Coccius who wrote for the local Gazette,

"At the time when the sun rose, one saw many large black balls which moved at high speed in the air towards the sun, then made half-turns, banging one against the others as if they were fighting a battle out a combat, a great number of them became red and igneous, thereafter they were consumed and died out."

​Could the people of Basel have seen two opposing alien groups locked in battle with each other? They certainly saw something. Interestingly, another theory on this particular case is that what the people of Basel may have witnessed was the battles for the sky of the Second World War that would be fought just short of four-hundred years later – that somehow one phenomena or another had caused a rip or tear in “space-time” and had caused the two realities to be somehow intertwined for a short period. That’s probably a theory for another article, but interesting stuff to say the very least, and it is well known that Hitler was very interested in UFO phenomena.
History is riddled with “recorded sightings” of strange phenomena and aircraft.

In fact, the first recorded UFO sighting in human history goes back to 1500 BC:

“On a February morning, in the twenty-second year of the reign of Pharaoh Thutmose III, a circle of fire in the sky appeared over Egypt. It hung silent and motionless, and brought with it a foul smell. The Pharaoh was informed and he meditated for a while on what should be done. While he thought, more circles appeared, filling the sky completely. They shone with a brightness that hid the sun. Then, in the hour after dinner, the circles moved off to the South and disappeared from view.”

Many writers and theorists have long held true their convictions that the ancient Egyptians and alien entities were connected, so at least from the Ancient Astronaut perspective, this recorded event seems to be exactly that – an event that happened.

In 732 it was recorded in the Anglo-Saxon records, “In this year terrible portents appeared in Northumbria, and miserably afflicted the inhabitants – these were exceptional flashes of lightning and fiery dragons were seen flying through the air!”

On New Year’s Day 1254, monks at St. Albans in Hertfordshire saw what looked “like a kind of ship – large and elegantly shaped and of a marvellous colour.”

​Over thirty years later in 1290 at Byland Abbey in Yorkshire, the abbot and monks noted they had seen “large round silver disc” flying over them. 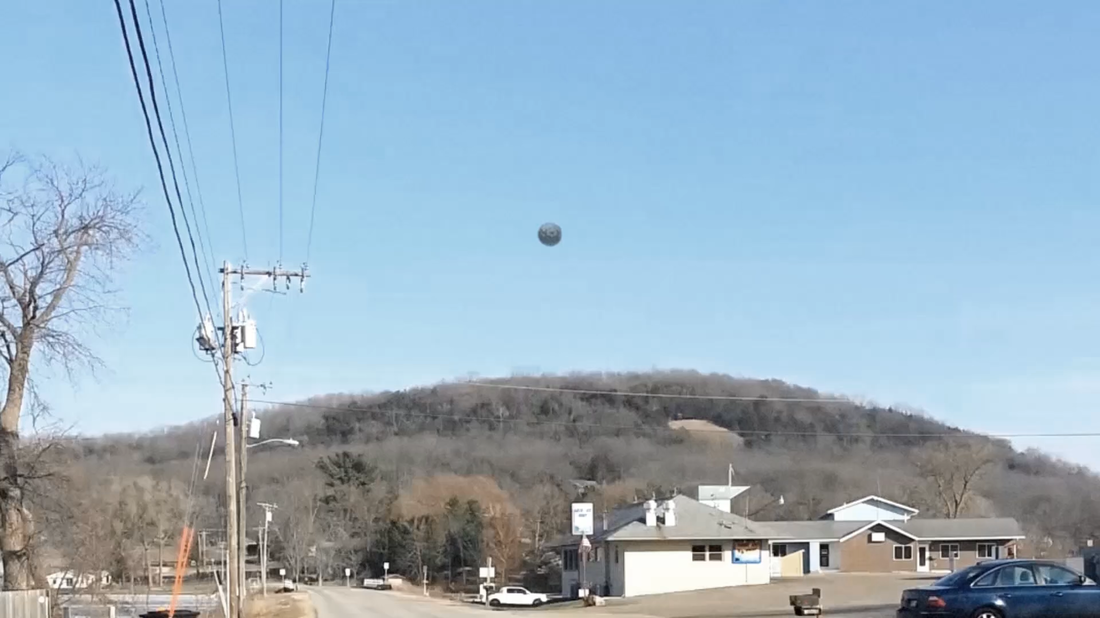 A modern day UFO sighting from 2013 - similar to the Black Balls described in Swtizerland in 1655?

The Bizarre Claims Of Sister Mary Of Agreda

Although the dates are different depending on the source – sometime around 1620, eighteen year old nun, Sister Mary of Agreda in Spain claimed to her superiors that “she had been flown in a craft to central America” and that while she was there she had converted a tribe called the Jumano to Christianity. She then went on to say that when she was “flying home” she had “seen the Earth – a spinning sphere, below her!”

At the time, she really couldn’t have known such information (not to mention that this was nearly three hundred years before modern flight as we know it today) and perhaps more importantly for her, what she was saying was considered heresy. Her detailed notes and diaries were burned by her fellow nuns and they demanded that she retract her claims.

In 1622, when Father Alonzo de Benavides arrived in New Mexico as a missionary he was shocked and a little annoyed that he been sent there to “do a job that had already been done” in that the local people were already practicing Christianity. They had rosaries and crosses and even practiced and celebrated mass.

When they were asked how they knew of such a religion they responded that “a lady in blue had told them when she had brought divine articles!”

It wasn’t until 1630 when Father de Benavides was back in Spain that he heard of Sister Mary and her wild flights story. He suspected this was the “lady in blue” of who he had been told and travelled to Agreda to question her.

He was amazed at the responses she gave to him as she gave very accurate accounts of villages, people, local lore and events,  and some of the customs that she would only know from having been in New Mexico.

It appeared as though what Sister Mary had claimed was indeed true – and if that is the case then who did fly her to New Mexico? And why?

​Whoever they are and whatever their reasons, it would appear they, have been around at least as long as us! 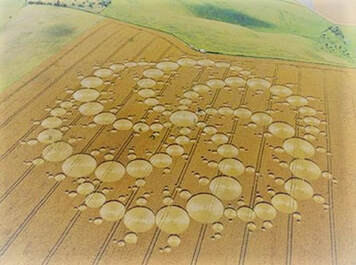 Crop Circles, Ice Rings And The Roswell Rock – Hoaxes? Alien Art? Or Messages That We  Are Yet To Understand?
We have all seen and are aware of crop circles, but are they really just simple hoaxes,  or is there more to them?