The Black Monk Of Pontefract And The Very Real Haunting Of 30 East Drive!

In 2012 the film When The Lights Went Out was released – a film directed by Pat Holden. The events in the movie are based very much on real-life events – events that are widely regarding as “Europe’s most violent haunting!” And at the center of them was Holden’s Aunt, Jean Pritchard, meaning that Holden witnessed many of the activities for himself.

The hauntings took place in Pontefract, West Yorkshire in England, at 30 East Drive on the Chequerfields Estate. Number 30 was on a hill on the estate, a place where it was later discovered that hundreds of years earlier many people had gone to their death’s on gallows that once stood there.

In When The Lights Went Out, the family consists of Jenny and Len Maynard and their daughter Sally, with the events that, in reality, had happened to two children, happening in the film to the lone daughter. You can read about the film here. It is recommended viewing if you have an interest in the paranormal but also gives an accurate glimpse into life in Yorkshire during this time.

The truth is, the family consisted of Jean and Joe Pritchard, their son Philip, 15, and their daughter Diane, 12. 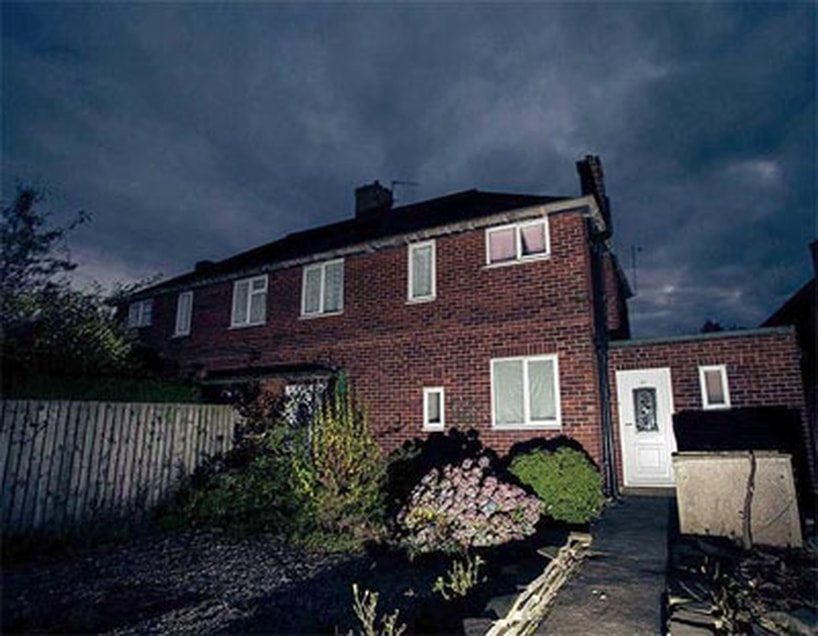 30 East Drive, Pontefract - the "most violent haunting in Europe" is said to have taken place here.

A Sudden Burst Of Paranormal Activity

Activity began disturbing the Pritchard family early in 1966. The disturbances ranged from furniture being overturned and lights being flicked on and off to gathering water pools in the middle of the room, pictures being damaged and slashed, “breathing sounds” being heard, and perhaps most frightening of all, the eventual sightings of a “black shadowed figure”, which as the hauntings went on, appeared more and more often around the house.

Despite a policeman, a vicar, and even a local MP all witnessing strange events at the house, the family was mocked by most. Perhaps worse for the Pritchards, the activity continued, and seemed to be getting more often and more aggressive. This activity seemed to reach a first “peak” at the end of August during the bank holiday weekend.

All of the family aside from Phillip had gone to Devon for a holiday. He had been left at the house in his grandmother’s care, a lady called Sarah Scholes. Despite the weather being very seasonably warm this particular day, Scholes felt gusts of bitterly cold air enter the room where she sat. Upon Phillip’s return to the house, the pair of them noticed what seemed to be “white powder or dust” falling to the ground as if it were coming from the ceiling of the room.

Scholes left the house to quickly go across the street to fetch her daughter, Marie Kelly, to see if she could make sense of what she and her grandson were witnessing. When Kelly entered the property she saw the white powder and also noticed a pool of water had formed on the kitchen floor. The three of them watched, stunned, as numerous other pools formed around them.

A neighbor who had noticed “some commotion” and was aware of the recent happenings at number 30, entered the house, and after turning the water off at the mains, informed the water board, suspecting that the pools were simply caused by a leak somewhere.

The water board did arrive to examine the pools of water later that afternoon and could find no leaks anywhere in or around the house. The pools stopped appearing several hours after they first started. 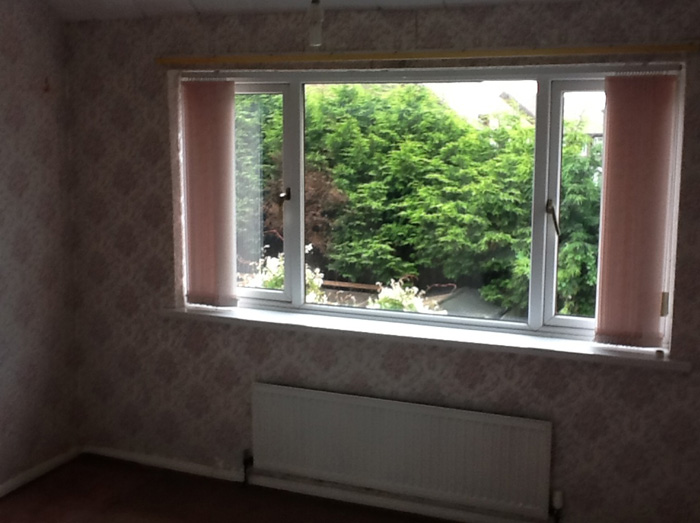 Inside one of the bedrooms as it is today - The Black Monk of Pontefract was said to have appeared in this room.
Later that evening, however, around 7 pm while watching television, Scholes heard her startled grandson shout from the kitchen "Grandma, it's happening again!"

Upon the worktop was a mess of sugar and tea leaves, and both of them witnessed the button on the tea dispenser being “pressed in and out” repeatedly, spraying the worktop with tea. Scholes screamed aloud involuntarily, “Stop it!” to which a loud bang came from the hallway behind them. When they opened the door, there was nothing there.

Then the hallway light came on “by itself!” A cupboard began to shake, making the crockery inside rattle.

At this point, Scholes and Phillip left the house, terrified and confused. Scholes again sought her daughter Marie, who went inside number 30 and witnessed for herself the crockery rattling inside the cupboard that was moving and shaking violently.

By 9:30 pm the activity once more seemed to have stopped and Marie left the pair to “get a good night's sleep” so they could reassess things in the morning. However, as Scholes went to say goodnight to her grandson, a chest of drawers suddenly began to sway violently in his room.

Not prepared to stay in the property, the two of them left and spent the night at a neighbor’s house. By the time the Pritchard family had returned from holiday, the disturbances had stopped as suddenly as they had started months before. The more time that passed, the more the family began to think that there must have been a “rational” explanation for the events. In all, two years went by without incident.

Then, with no warning, the activity started again.

The family, though, were determined to not be driven from their home and managed for several years to “co-exist” with the entity, who they had taken to calling "Fred". However, the focus of the activity now seemed to be on the young daughter (now 14 years old), Diane Pritchard. She was regularly “thrown from her bed” and on one occasion was even dragged up the stairs by her throat by an “invisible hand” that left obvious marks and bruises on her neck. 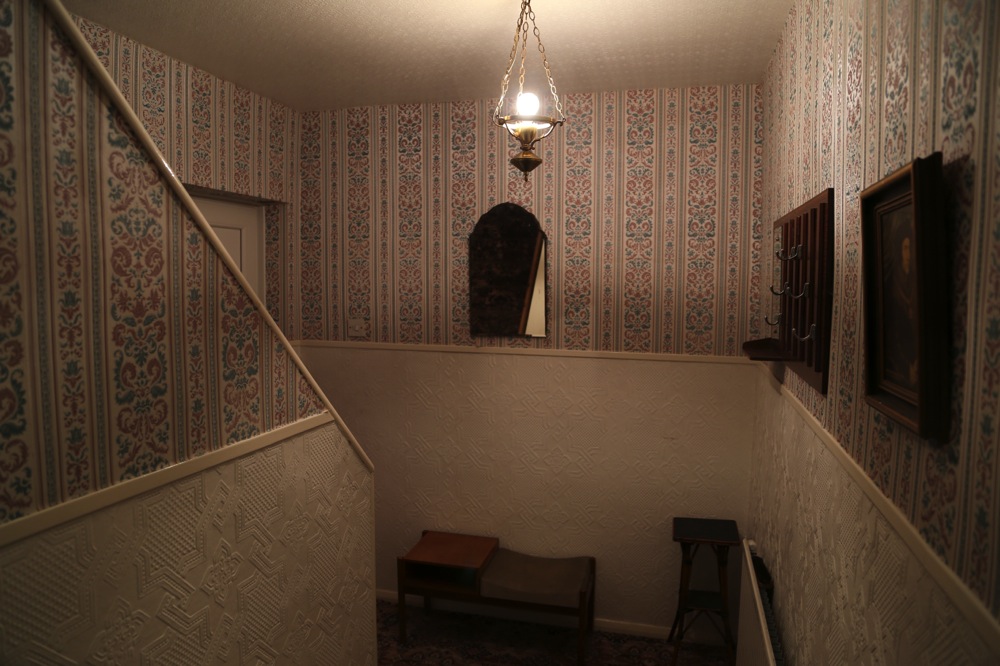 The landing at the the top of the stairs where DIane Pritchard was dragged by her neck by an invisible hand that left marks and bruising.

Whenever the Pritchards had company it seemed that Fred would make loud crashing noises around the house and would send random objects flying through the air.

When the family did try to exorcise the property, it seemed to only make the situation worse – almost agitating Fred. On one occasion, in particular, a friend of the family was said to have spread “holy water” throughout the house. Fred responded by “painting” upside-down crosses on the walls.

Towards the end of the Pritchards' experience, they began to visibly see their tormentor.

Jean and Jim reported seeing it first. Both awoke one night to see a cloaked dark figure at the bottom of their bed watching them before it simply “disappeared.” The figure was seen by others in the family, including Diane who still seemed to be Fred’s main focus. Despite the numerous sightings no-one could ever see or recall seeing the figure's face.

And then, again right out of the blue, the haunting and disturbances stopped, with no activity experienced by the Pritchards again or since. 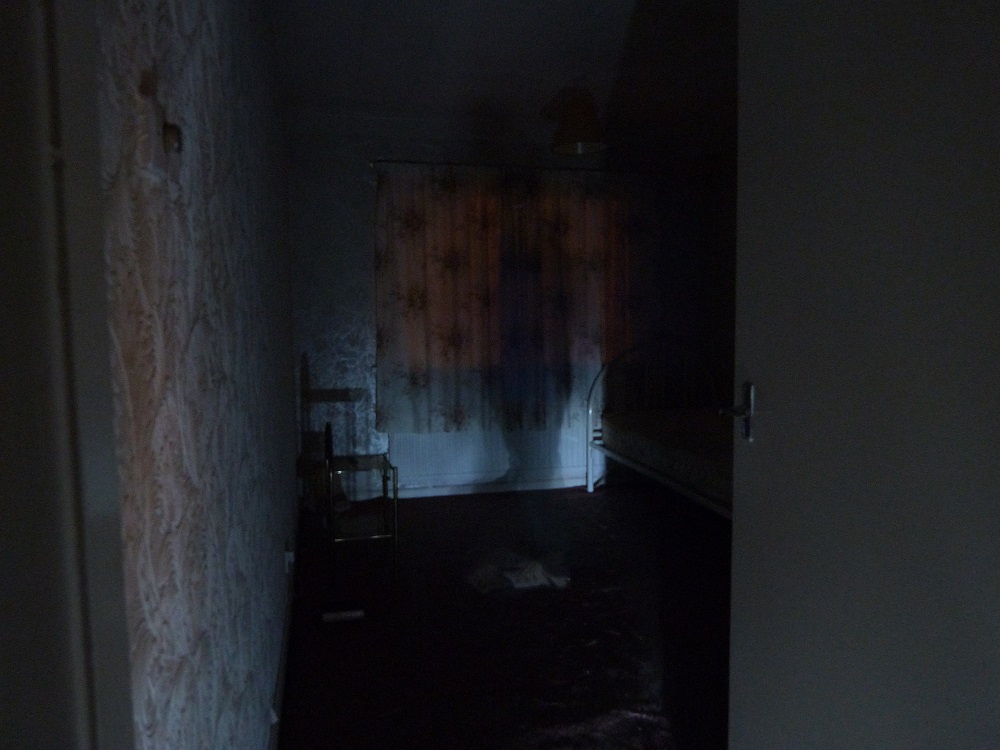 This picture allegedly shows The Black Monk of Pontefract?
Tom Cuniff investigated the haunting and the history of the area. He wrote that the black figure the family had witnessed was most likely that of a sixteenth-century monk who had been hanged on the gallows for the rape and murder of a young girl where the Pritchards' house was built. He was known, according to Cuniff, as the “Black Monk of Pontefract.”

Around the release of the film, there was a surge of interest in the house, with many people traveling to the property in the hope of witnessing the Black Monk or some form paranormal activity. Some worry that this interest and activity around the house is even starting to “stir” the entity.

Phillip Pritchard had sold the property shortly before the 2012 film was made (as it turned out, to the producer of When The Lights Went Out, Bil Bungay). Neighbour, Carol Fieldhouse, claimed to a local newspaper that she had seen Phillip in the garden tidying it when she approached him. She would state:

“I went out and asked him if he’d sold it to one of his nephews. I thought it must have been one of them because I knew they were deaf and I’d heard the telly blasting out all night. He said ‘There’s no TV in there. It’s ­empty’. Then he turned pale and said ‘God, it’s started again’. I haven’t seen him since!"

Make of that what you will. 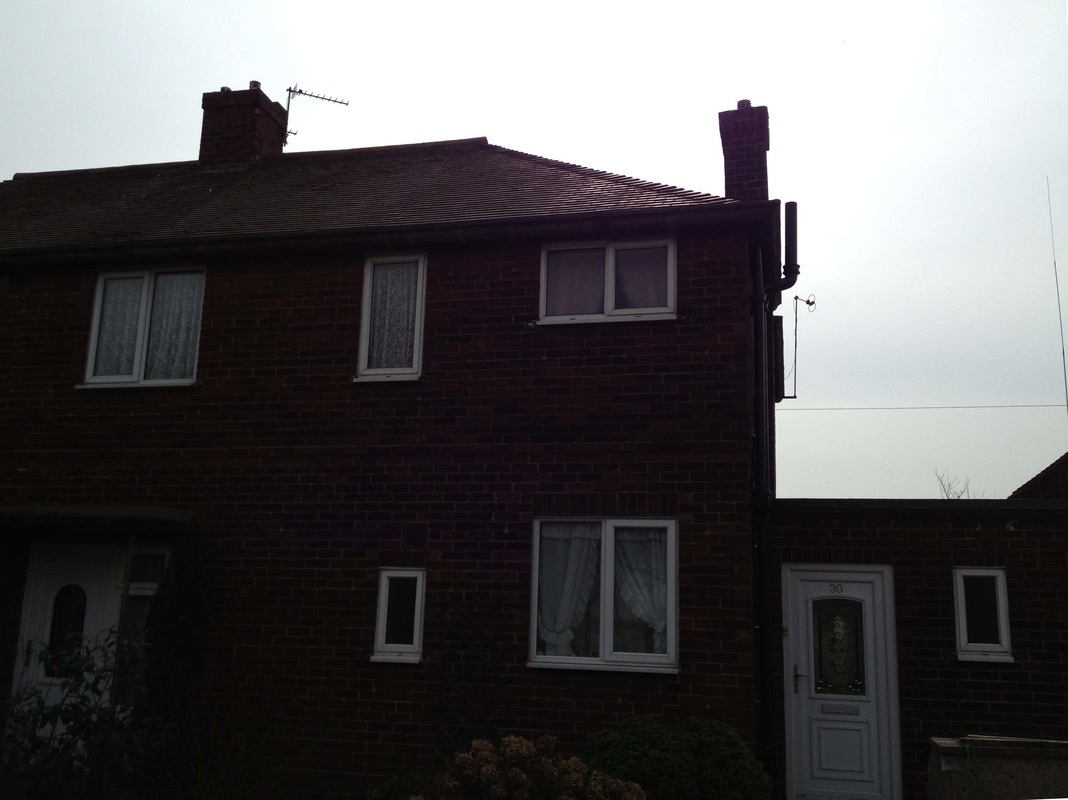 Some people "fear" that recent interest in 30 East Drive will "stir" the entity once again.
You can see an interview with the director of When The Lights Go Out here. As mentioned before, Holden had first-hand experience of the real hauntings as Jean Pritchard (Jenny Maynard in the film) was his aunt.

Also, check out the videos below for further viewing and theories on the famous haunting and a preview to When The Lights Go Out. 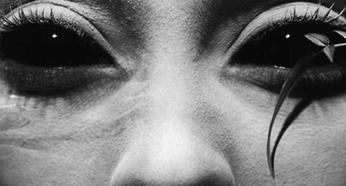