Zigmund Adamski – Was He Really “Killed” By Aliens That “Frequent” The Ilkley Moor, West Yorkshire?

A little while back we published an article that singled out ten random alien abduction claims – you can read that in full here. The first case in that piece was the that of an un-named man, who has refused all monies to reveal his identity – and is known only as “former policeman Phillip Spencer” who claimed he was abducted from the Ilkley Moor in West Yorkshire, England.

On that particular morning on 1st December 1987, Spencer was setting off from Ilkley to visit his father-in-law in East Morton. During his journey while driving up a steep hillside Spencer became aware of a humming sound around his vehicle which he assumed to be a low flying aircraft. As he looked around he noticed a small figure off to his left who seemed to be running up an overgrown quarry. Spencer shouted out to the figure, who appeared to hear him and then seemed to “wave him off.”

Realising he had his camera, Spencer managed to get one clear shot of the creature before it vanished over an outcrop. He left his car and proceed to climb the quarry in search of what he had just seen. As he reached the top of the hill and the outcrop where the being had disappeared, he was confronted with what he described as a “huge silver disk shaped object.”

The disk rose above him and then shot away at speed. 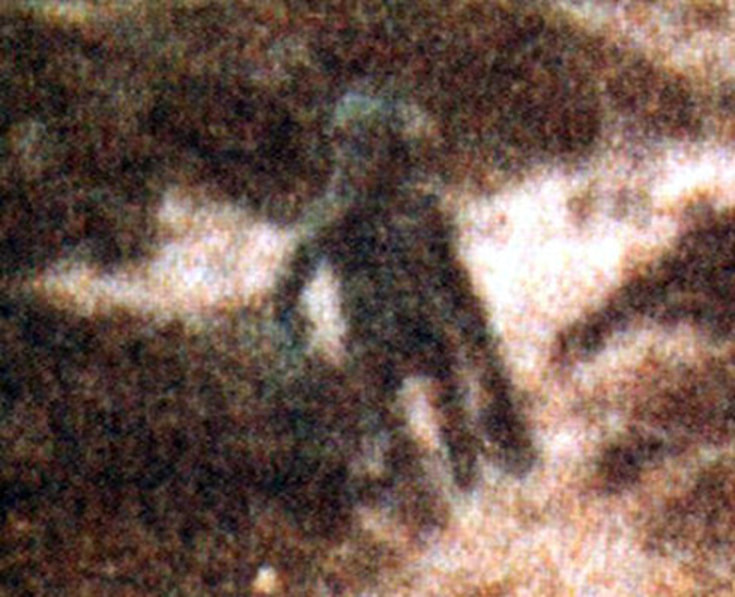 Does this picture show a "real" alien - the picture taken by "Phillip Spencer"
Deciding to return straight back to Ilkley following his encounter he proceeded back the way he had come. However when he reached his village he noticed shops were all open and trading.  He realised it was after 10am – he had “lost” nearly three hours.

The picture he had snapped was developed and analysed by experts – all of which agreed that at the very least the photograph itself was not tampered with. In the days following the event, Spencer began to have strange, vivid dreams, and still could not recall the missing three hours after seeing the silver disk in the sky. This led him to suggest and seek, hypnotic regression.

​During his sessions it was revealed that he had been “lifted” on to the craft by an unknown force and found himself in a medical looking room – he was told “not to be afraid.” He also stated that at one point during the “journey” he could see what looked to be a portal and through it he could see what he recognised as Earth in the distance, leading him to realise he was in outer space.

The case has been examined by numerous UFOlogists and The Daily Telegraph even saw fit to place it in their list of Top Ten UK UFO incidents, which you can read here. 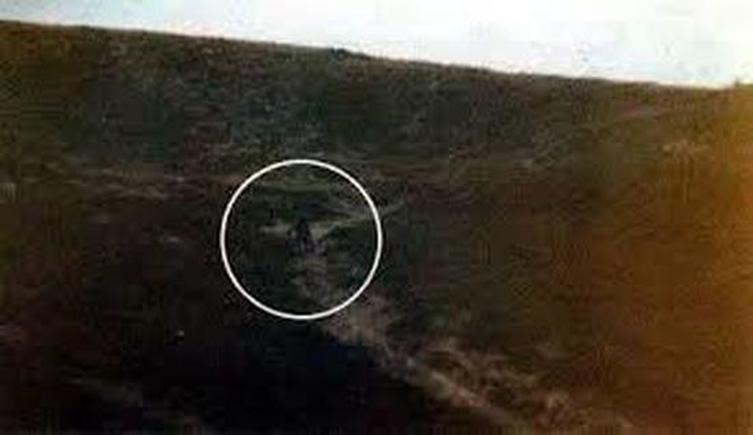 Spencer's picture at it's original size.

The Grim Discovery Of Zigmund Adamski

What makes “Spencer’s” story all the more interesting, is that seven years earlier on 16th June 1980, a short way away on the Ilkley Moor near Todmorden, 56-year old coal miner Zigmund Adamski was found dead, lying on top of a pile of coal over twenty miles from his home in Tingley.

Adamski had left his home five days earlier “to get some potatoes” and had not been heard from since.

Upon investigation he was found to have strange burns on the back of his head, neck and shoulders, and there appeared to have been an “ointment” or “gel” applied to them that although later analysed, could not be identified.

Although he was clothed in his trousers and jacket, he was not wearing his shirt that he had left the house in, and he looked as though someone had “re-dressed” him – his trousers and shoes were not fastened properly and his coat was buttoned the wrong way.

There was what appeared to be only one day’s growth of beard (despite him being missing for five days) and there were no traces of coal dust on his clothes or person – it appeared as though someone had “lowered him down from above” on to the pile of coal.

​The ruling upon the initial examination at the scene was a heart attack (Adamski did have health problems concerning his heart) but PC Alan Godfrey (one of the two policeman who responded to the report made by a coal driver of a body being found) described later the look on Adamski’s now lifeless face as being “contorted with terror” – something the coroner also agreed with stating that the deceased must have “known great fear or pain” in the moments before he died. 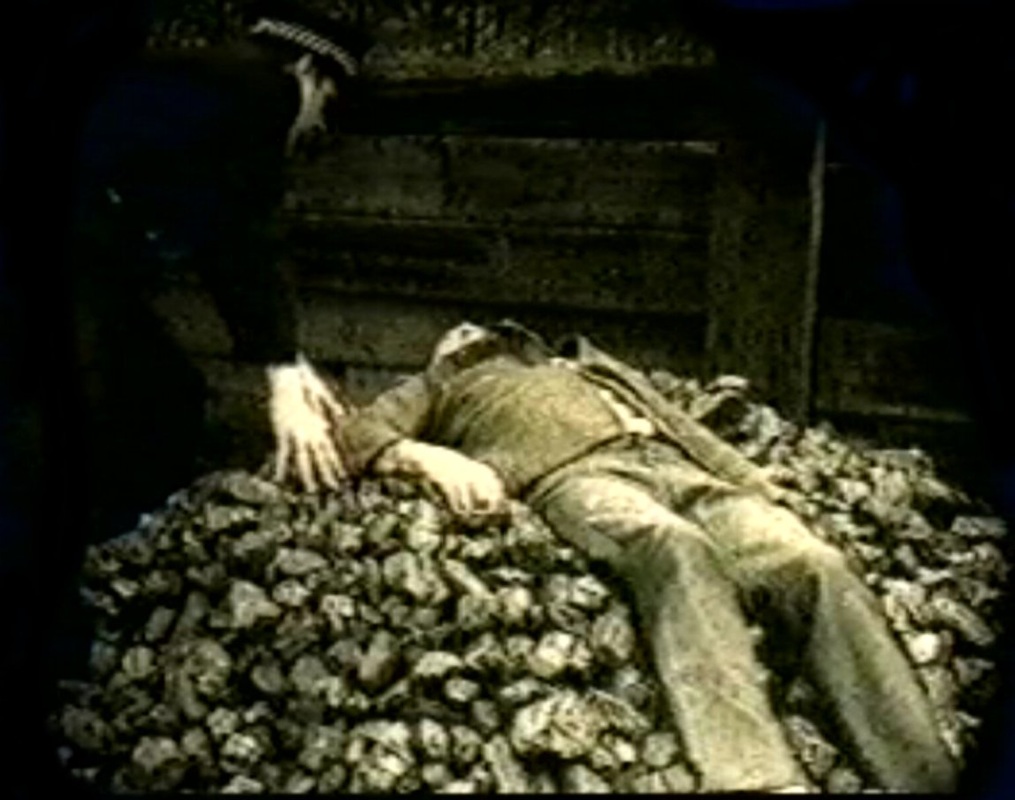 Zigmund Adamski was found lying on top of a pile of coal as if he had "been lowered down from above!"
According to writer’s Roger Boar and Nigel Blundell on their piece on the subject, one of the two policeman who initially responded to the body being found came forward to his superiors in the days following the discovery and stated that he had “seen what looked like a flying saucer” in the area only hours before. He was questioned under hypnosis, with UFO experts believing his account to be true, but the police refused to name him publicly.

The aforementioned PC Alan Goddard however made his own claims a little under six months later, which made him begin to wonder if his experience may have been the same as Adamski’s. His claims were independently investigated by UFO researchers.

Goddard claimed that while he was on duty on 28th November 1980 he was driving around a Todmorden council housing estate at just after 5am, when he saw what he first thought was a bus in the distance. As he got closer he realised that “the bus” was floating about five feet above the ground and that the underneath of the object was spinning.

Goddard attempted to radio in the sighting but neither his car radio nor his walkie-talkie would work. He was in two minds as to whether he should say anything or not, but when he heard that four policemen in nearby Halifax had also reported seeing something similar, Goddard filed his report on the sighting.

​Upon the UFO researcher’s investigation they found that Goddard was “missing” fifteen minutes of time and they urged him to undergo hypnosis to try and recover the lost moments.

He agreed and recalled how he could see a bright light that was coming from the craft that was blinding him and made him pass out. When he regained consciousness he found himself in a room on a table, a six-foot figure dressed in black and white was in the room with him – perhaps bizarrely, Goddard recalled that the figure had a beard and a skull cap.

Journalist John Sheard, who witnessed the video of the hypnosis session relayed PC Godfrey’s words to the reader in an edition of the Sunday Mirror (27th September 1981):

“They’re horrible…..small…three to four feet, like five year old lads! There are eight of them. He’s touching me…..He’s feeling at my clothes. They have hands and heads like a lamp. They keep touching me…….they are making noises……Joseph, I know him as Joseph. He has told me not to be frightened.

At this point the session was ended by the hypnotist due to the distress his patient was obviously in. In a second hypnosis session when asked what the machine looked like that was examining him, Godfrey replied: ​

“I haven’t to answer that! I haven’t to tell you! Each time I think about it I get a pain!

One last curious thing that Godfrey stated was that the aliens removed his socks and shoes so they could examine his feet – he then found himself in his car! Remember that Admanski looked as though his clothes had been put on after he had died, including his socks and shoes!

Could it be that like Goddard, and “Spencer” several years later, Adamski had been abducted and subjected to experiments, only this time he did not survive – the terror of the situation causing Adamski’s heart to give out? Or perhaps he just wasn’t healthy enough to withstand the experiments – he had known health issues at the time of his death. Is there even any likelihood that “Spencer” who was abducted in 1987 was the same “unnamed” policeman who had investigated Adamski’s death in June 1980 and made his claims to his superiors?

​Incidentally, the hypnosis sessions revealed that Goddard had quite a history of these kinds of experiences. You can read a little bit more about them in full here. 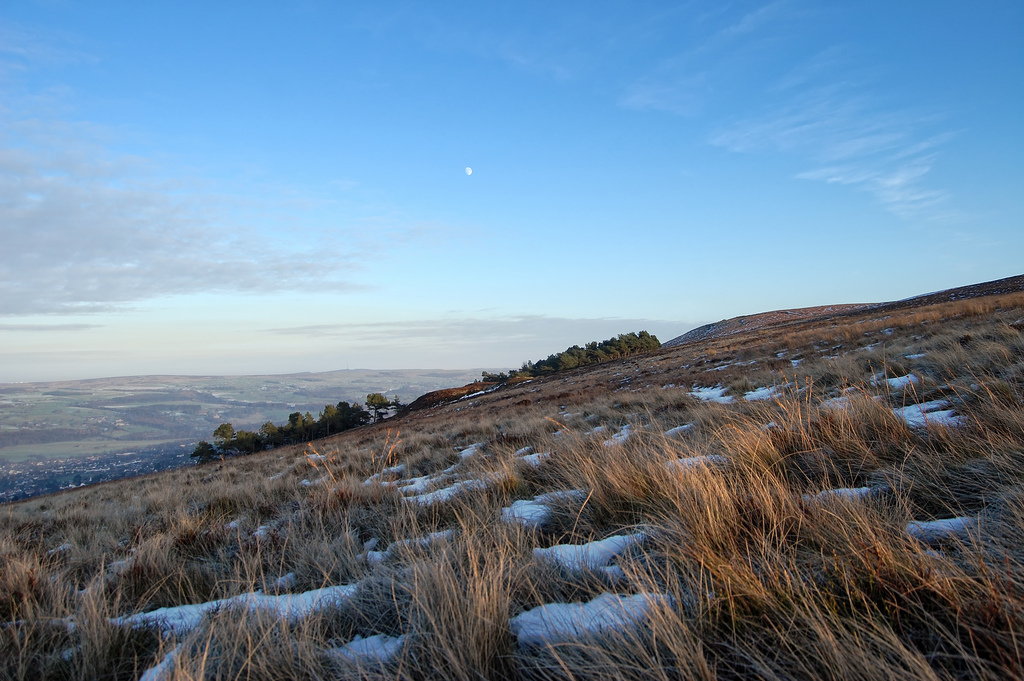 Ilkley Moor - a "hot-spot" of UFO activity
Although Adamski’s death is still unsolved, in 2005 it came to light during an investigation by BUFORA  (British UFO Research Association) that he and his wife, Leokadia, had been in the middle of a family feud, with one relative moving in with them after a restraining order had been taken out on him by another family member. BUFORA surmised that Zigmund Adamsku had in all likeliness been kidnapped by a relative, and held in a shed for the five days he was missing, where he had suffered the fatal heart-attack.

However that doesn’t explain the strange markings on his body, nor the look of fear that was said to have been on his face. It also doesn’t explain how he had managed to get on top of the pile of coal with no coal dust on his clothes. When you add to that the “Spencer” incident years later and the unnamed officer at the time of Adamski’s death and his claims, not to mention the area is a known “hot-spot” for this sort of activity and UFO sightings, as well as PC Goddard’s involvement, it is hard to ignore or dismiss the “alien/UFO” aspect of this case completely.

​Incidentally, to those who feel Goddard may be seeking attention or even money from his claims, he stated to Sheard, “I wish to hell all this had never happened to me. I’m just an ordinary bloke doing an ordinary job as a small-town bobby! Do you think being associated with flying saucers makes my life any easier? I’ve never even read a science-fiction book in my life!” 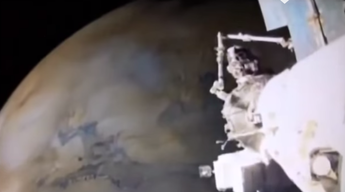 Project Redsun, “Mona Lisa” The Alien Girl And Secret Missions To The  Moon – Real Life Conspiracies Or Elaborate Hoaxes?
Some people claim the moon missions carried on after Apollo 17, in fact  some people claim we went further than just the moon!