The CIA Remote Mission To Mars - Over One Million Years BC?

​While most of the United States, and to only a very slightly lesser extent, the rest of the world watched the inauguration of Donald Trump on 17th February 2017, the CIA took the moment to make available to the public declassified documents concerning areas of research that, on the surface, would be more akin to a script of the X-Files than government projects – at least to the vast majority who reside outside of conspiracy circles. You can read a little more about the recent declassified CIA files here. 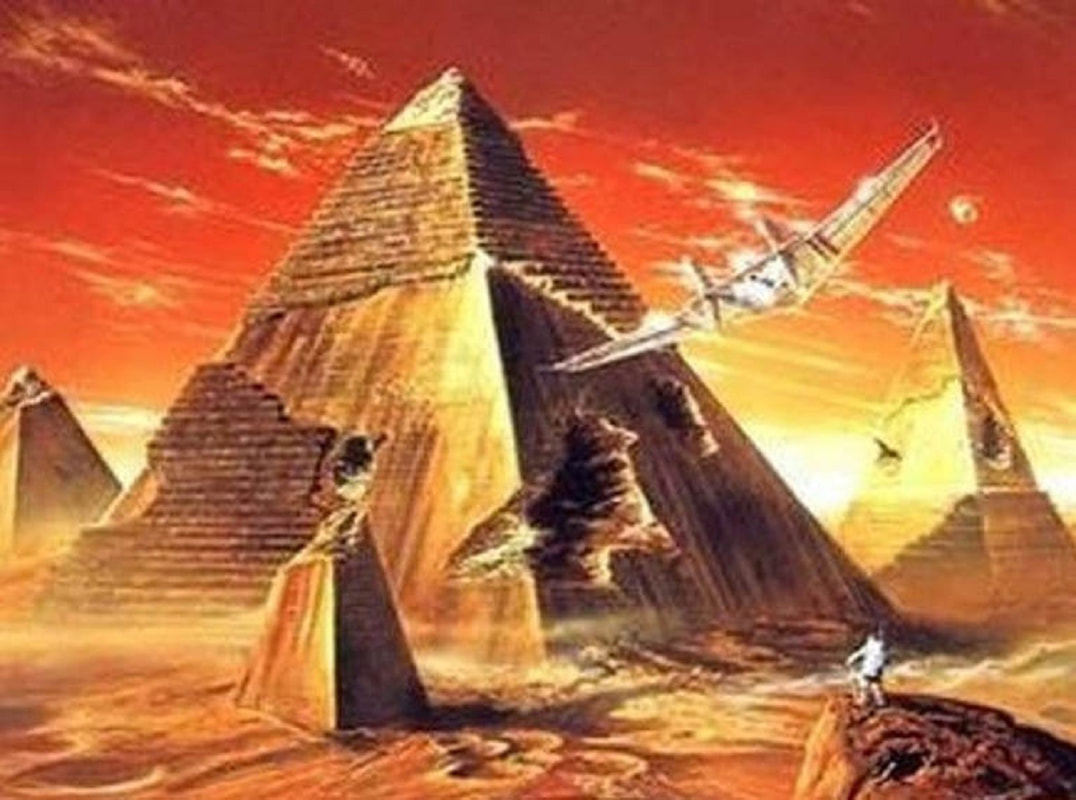 ​One account, in particular, spoke of a remote viewing session, apparently conducted in May 1984 by a remote viewer referred to and recorded only as “The Subject”.

The covering letter from the transcript of the experiment reads:

Selected geographic coordinates, provided by the parties requesting the information, were verbally given to the subject during the interview.”

As we will see in a moment, that was not even the most bizarre part of the transcript.

Civilizations, Pyramids, And The Giants Of Mars

After being given the first of these coordinates (40.89 north, 9.55 west) – being completely unaware of their destination, he responded that he could see a “pyramid, or pyramid form. It’s very high. It’s kind of sitting in a large depressed area!”

​He would describe a civilization being present on the planet, and of highly advanced technology at the disposal of this society. He spoke of cities of “large flat surfaces” with “very smooth angles” which were “very large! I mean they’re megalithic!”

He would also describe a destabilization of the area when he stated, “I’m tracking severe, severe clouds, more like dust storm……it’s a geological problem!”

He was then given a series of coordinates, each time describing what he saw. These ranged from huge structures and cities inside canyons, which were “like rabbit warrens” with “very high walls!” to a structure that resembled the obelisk in Washington, and “strange intersecting roads that are dug into valleys!”

As the session progressed, however, the subject began to have difficulty focusing on the given coordinates. He was however drawn to things of interest. It was decided to let the subject go where he was drawn to, and it was here where some of the most baffling responses were made.

​He described again seeing huge pyramids which were designed as “shelters from storms!” He was then asked to enter one of these pyramids and describe what he could see. He responded that there were many different chambers that had been “almost stripped of any kinds of furnishings” and were now a “strictly functional place for sleeping” or “some form of hibernation!” 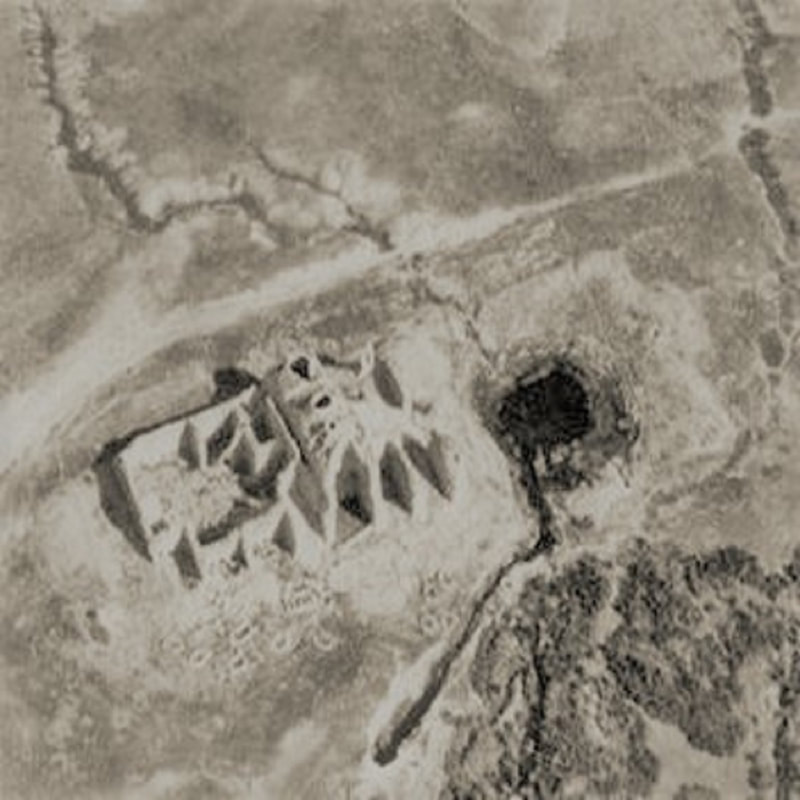 Does this image show the remains of an ancient Martian civilization?
When asked to describe who was using the pyramids as shelter he responded, “very large people, but they’re thin! They look thin because of their height and they dress in a real light silk, but it’s not flowing type of clothing, it’s like cut to fit! They’re ancient people. They’re dying, it’s past their time or age!”

He went on to describe that they were “waiting for something to return, or (on) something coming with an answer!”

​When asked what they were waiting for, the subject replied, “a group or party of them went to find a new place to live!” This was, said the subject, due to “corruption of their environment! It’s failing very rapidly and this group went somewhere, a long way to find another place to live.”

He was then asked to describe how this group left, to which he would reply, “…..it looks like the inside of a larger boat. Very rounded walls and shiny metal!”

The subject was encouraged to “go along with them” and describe the destination of their journey. He would state:

“…….(I get the) impression of a really crazy place, with volcanoes and gas pockets and strange plants, very volatile place” which although similar to the place they had just left, was mainly different due to the fact “there seems to be a lot of vegetation where the other place did not have it. And (a) different kind of storm!”

At this point, the remote viewing session was brought to an end.

​Might the subject have been describing Earth 1.5 million years ago? And perhaps more importantly, what became of the party that apparently arrived here, as well as the cities in the Cydonia region of Mars? Before we look at this in more detail, check out the short video below, which looks at just some of the apparent ancient ruins on Martian soil, and you can read the transcript of the documents here.

The CIA has confirmed that they, at the very least, conducted basic research into remote viewing. However, some believe their “research” to have gone much further than the impression they give.

Ingo Swann, for example, has made numerous claims of remote viewing to the Moon, and even as far as Jupiter. What perhaps should be noted, particularly in the case of his journey to the gas giant, is some of the information given (in 1973) would later be proven very much correct by NASA space probes and analysis. You can read a little more about Ingo Swann here.

The coordinates given by the unnamed remote viewer in the 1984 session, fall into the Cydonia region of the red planet – not only the place where the “Face on Mars” resided, but also, according to a small plethora of researchers and authors, do the remains and ruins of an ancient civilization.

What is also interesting about the claims of life existing on Mars millions of years ago is that other claims, apparently independently from these once-classified CIA files, speak of very similar things.

We looked briefly at the claims of Boriska when we looked at reincarnation. During part of the interview, he makes very clear claims of having once lived on Mars in a “three million years ago!” He also spoke of how these civilizations were highly advanced who would “travel throughout the galaxy” on ships that utilized plasma or ion power, and even had stargates and portals. Is it at all possible – if we accept his claims as true – that the civilization he speaks of is the same as the subject did in the 1984 session?

You can view the Project Camelot interview with Boriska in full below.

More recently, propulsion scientist, John Brandenburg, claimed that there was evidence of a nuclear catastrophe has happened in Mars’ distant past, and what’s more, he had proof of it. He claimed that the regions of Cydonia (the same region that was remote viewed by the subject) has vastly enriched levels or uranium and thorium in the soil. There are also increased amounts Xenon 129 in the atmosphere.

Brandenburg argued that these are all signs of a nuclear explosion, although he would go even further when he stated his belief that ancient ruins would likely be discovered on the red planet, and that the nuclear explosions were likely the cause of an “advanced civilization’” purposeful act as opposed to a natural disaster of some kind.

While Brandenburg’s theories don’t completely tally up with the CIA remote viewing experiment of 1984, it does speak of an advanced civilization – over a million years ago – in the same region as the subject was directed to look.

​You can read a little more about this here, and check out the video below for a little further viewing.
Although it is open to interpretation, some writings concerning the Sphinx at Giza appear to have direct connections to Mars. The Sphinx itself – of which there is intense debate as to how old it actually might be – was once a shining red color, the same red as we perceive Mars to be. Further to that, Cairo, when using its Arabic name of “Al Qahirah” translates to The Place Of Mars. You can read more about this here.

​This is perhaps even more intriguing when you also consider the claims of pyramids and even a sphinx being spotted on the surface of Mars. Further to that, these apparent megalithic Martian structures are of the same dimensions and layout as the Pyramids of Giza. You can read a little more about this here. 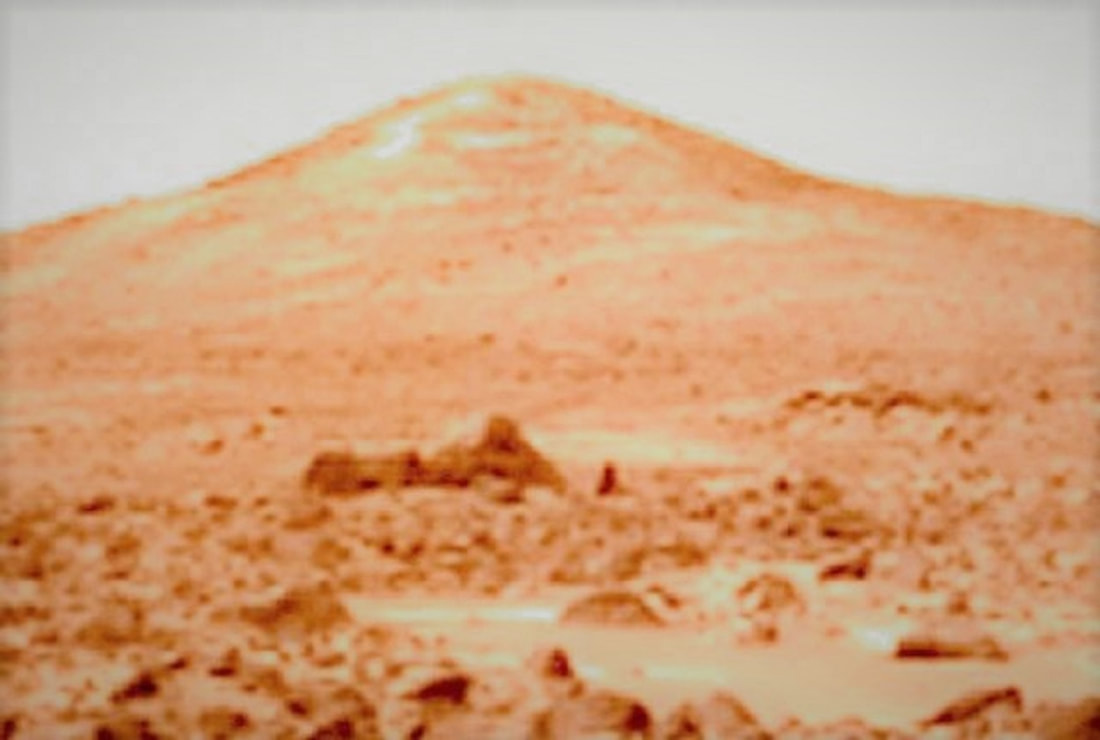 Is this a sphinx and pyramid on Mars?
As much as an outlandish theory as it might seem, could it be possible that an ancient civilization from an atmosphere depleted Mars found its way to Earth 1.5 million years ago. Further to that, might they have also brought with them such things that we now associate, primarily but not exclusively, with ancient Egypt?

There are many reported UFO sightings that speak of strange signs that resemble hieroglyphics or petroglyphs seen in ancient Egypt. If those reports can be believed, then does that not only suggest that an ancient Martian race actually be our descendants from antiquity, but might there still be a “pocket” of these beings that still exist, whether residing somewhere here on Earth, perhaps within the planet if you subscribe to the Hollow Earth Theory?

Or maybe the Moon?

If we go back to Ingo Swann again for a moment, one of the encounters he speaks about is of being given coordinates by a mysterious CIA agent for him to remote view. He found himself viewing a metropolis of sorts on the dark side of the moon. This colony, however, was not abandoned. It contained “living beings” that not only noticed his presence but who the agent who had given him the coordinates to track insinuated may not be entirely human. Make of that what you will.

Check out the videos below. The first looks at some of the CIA remote control experiments, while the second looks a little more in depth at the Sphinx on Mars. The last video is an in-depth look at the connections between Mars, ancient Egypt and even Atlantis. 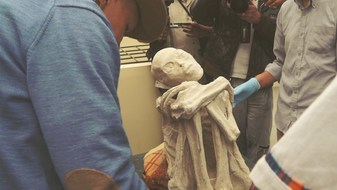 The Ancient Alien Body Discovered Near The Nazca Lines In Peru?
The recent discovery of a strange mummified body in Peru has many scientists already declaring that what they have found may very well be an "unidentified species" - a discovery that would prove both the existence of alien life, and the basic theory of the ancient astronaut hypothesis....